The second-generation is smarter, faster and cheaper 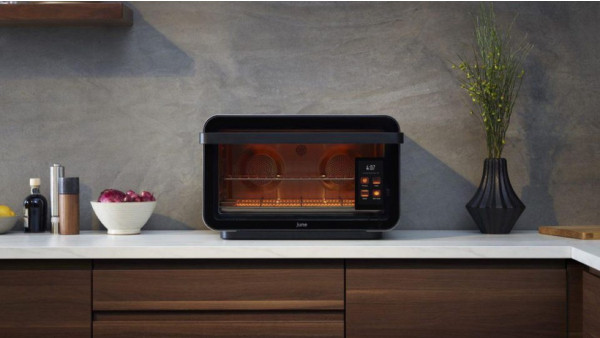 You might think that cooking food in an oven is already a simple process - you get a tray out, put your out-of-date ready meal on it, move the dials about a bit and voil├Ā, you've fought off starvation for another night.

But June is on a mission to streamline this even further, and it's back with a second generation of its Intelligent Oven - one that's able to recognise your food and automatically set the cook time and temperature based on a number of pre-set options.

Just like the first generation, the device uses a built-in camera, Wi-Fi connectivity, an internal processor and cook-centric algorithms to decipher what food you've placed inside, with users able to watch the cooking unfold and receive notifications when the timer has finished. You can also still ask for things like updates on cooking times through the device's Alexa skill.

But while the general gist is much the same, some significant upgrades are available through the second Intelligent Oven. While the initial device could only recognise 25 foods and users could only set it to bake, broil, roast or toast an item, it can now identify double the amount of foods, and there are now also additional functions, including an air fryer, dehydrator, slow cooker and warming drawer.

Once it does identify the type of food you're looking to cook, users can also select from over 100 cooking programs to achieve their preference. If you select 'medium rare steak' through the device's touch panel, for example, the oven will automatically switch between roasting, broiling and baking.

And the added cooking smarts aren't the only upgrade over the original - June's initial Intelligent Oven set owners back $1,495, while the improved version will cost just $599. And though the design specs are largely the same (for reference, the oven is around the same size as a microwave), the price was perhaps the biggest factor holding the June oven back from wider popularity. It's still a lot to pay for an area of smart tech only just getting off the ground, but it does manage to pack a lot of fresh functionality into a single countertop package.

If you're looking to make your cooking smarter, the second generation Intelligent Oven is already available from the June website. No more reading the back of packets for you, hey.