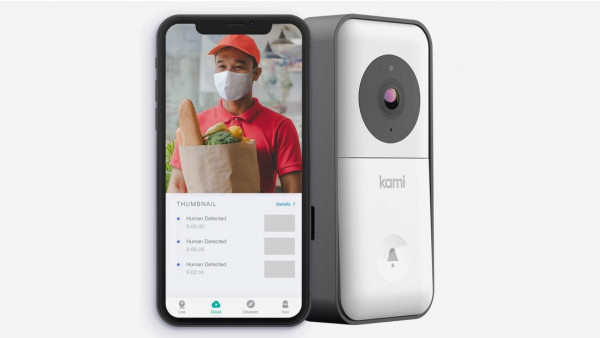 With the detection smarts taking place on the device itself, rather than being processed in the cloud, the Wi-Fi-connected Kami Doorbell Camera (2 or 5GHz) will let you know when someone is at the door, obviously, but will also identify individual human faces and store them in a private 'Face Album'.

The idea is that you'll be able to see exactly who is at the door and therefore don't answer if its your mother in law. Well, my mother in law at least.

The AI detection, we're informed, is so advanced that you shouldn't be pestered by notifications of movement from things like animals, birds, vehicles, light changes or flying insects.

It also has color night vision thanks to six 850nm IR LEDs on board.

There are multiple powering options available - you can make use of the detachable battery, which lasts for around 150 days or you can hard-wire it using either USB or AC power.

ThereŌĆÖs no local storage but there's an option for cloud recording via a subscription; just be careful where you subscribe to get the best deal.

When we reviewed the Kami Cam recently we found that, if you use the app you only get subscription options for up to five cameras, which starts at $74.99 a month for 7-day history. However, go online, and you can subscribe for $40 a year for a single camera for the same video history.

There's no support, yet, for Alexa or the Google Assistant but we're told that should be arriving later this year.

The Kami Doorbell Camera is on sale now, from Amazon or direct from Kami for $99.99.

Kami is part of Yi Technology, which used to be part of Xiaomi but branched out on its own a few years back and is now based in San Jose, CA.