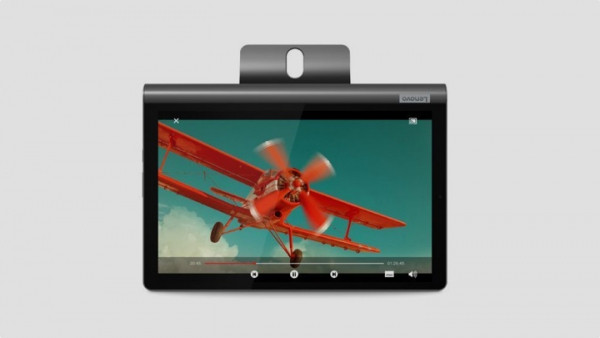 Lenovo will use Google Assistant to turn its new 10.2-inch tablet, dubbed the Yoga Smart Tab, into a smart display, according to details leaked through its official website.

The page, first spotted by Liliputing, shows a tablet that appears to be designed very much with smart display functionality as its focus, coming with a kickstand and the Assistant built in to answer commands and offer hands-free control.

Read next: Best smart speakers for 2019

The kickstand can be used in any of four ways, from handheld to raised like a TV on a table-top, to lying flat on a counter or hung from a wall-hook, like you might a painting.

Taking advantage of this adaptability, the tablet will feature Google Assistant's Ambient Mode, the setting that turns the tablet into a smart display, with the voice assistant waiting for commands, from smart home control to music playback or questions. Lenovo says that the tablet will have three far-field microphones to ensure that your voice is picked up, too.

Lenovo is no stranger to smart tablets, having put Alexa in its Smart Tab earlier this year. That tablet used a full dock to enter Amazon's Show Mode and become a smart display, whereas the Yoga Smart Tab will be more standalone. We weren't overawed by the Alexa experience on the Smart Tab, but Google could be a different proposition.

Music playback will be through two JBL speakers packed inside, while the screen is a 1920 x 1200 pixel display. All the other expected mod cons are present and correct, too, from front and rear cameras (that won't be hugely useful other than for video calling), light water resistance and a Qualcomm Snapdragon 439 processor powering it all. Expandable storage via microSD card can give you up to an extra 256 gigabytes of memory, as well.

The Yoga Smart Tab looks to be a standard mid-range tablet, but its pivot towards smart home control certainly represents an interesting twist on the format. There's no word on pricing yet, but if it proves to be a successful product, it could open the door to more tablets that can convert into effective smart speakers or smart home hubs when needed.