LG's new smart fridge will open when you tell it to 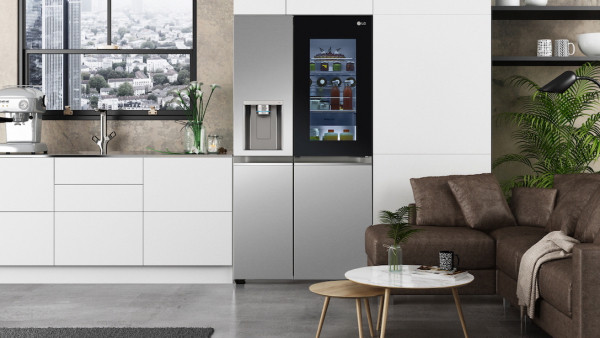 LG has revealed the 2021 version of its InstaView Door-in-Door refrigerator with the standout new addition being you can tell the door to open with your voice.

LG's range of smart fridges already had both Alexa and Google Assistant on board, so you can add stuff to your shopping lists, play music and use your fridge as a kitchen hub - but that voice functionality now extends to saying: "Open the refrigerator door."

Handy, for when your hands are full.

As well as the upgraded voice smarts, the new 2021 InstaView model has a 23% larger display window that its predecessors. The previous flagship had a 29-inch screen, so we'd guess this one will be around 35 inches.

If you're not already aware, the screen on the front of the InstaView fridge is essentially a tablet running webOS, where you can do things like upload family photos, make notes or leave doodles for your kids.

But the screen has a hidden trick. Two taps on the glass will turn it transparent, so you can see inside the fridge, and check out how many beers you have left.

The new model also boasts UVnano technology to "harnesses the power of light to effortlessly and effectively maintain a hygienic and germ-free water dispenser tap."

We're told that the UVnano removes up to 99.99% of bacteria on the refrigeratorŌĆÖs dispenser tap.

Instead the Korean tech giant focuses on the wow-factor, with the emphasis on building the biggest, loudest display booths at the shows to show off its cutting edge products.

With CES 2021 set to be a virtual event we expect that LG will do something similar to what it did at IFA, back in September, when it gave us a tour of the ThinQ Home; an actual residence the South Korean city of Pangyo (known as KoreaŌĆÖs Silicon Valley).