CES 2018: AI and deep learning take centre stage but it's all a bit confusing 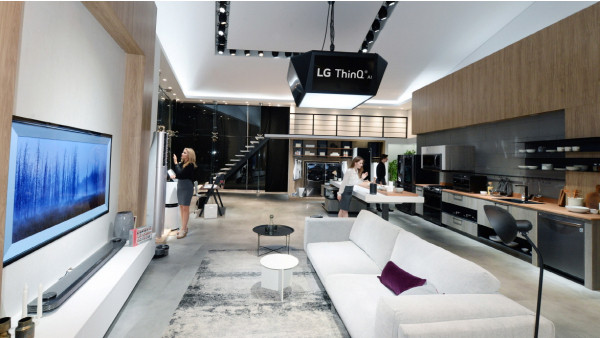 LG's was the first major press conference of this year's CES and it was full of exciting announcements... and badly behaved robots.

The Korean company had already teased us that it was to launch a slew of products under a new name, ThinQ; an umbrella brand for AI connected products. At the Vegas expo it took the covers off of a smart fridge - InstaView ThinQ, along with a connected EasyClean cooker and a QuadWash dishwasher.

The theory and logic behind the trio is sound; the clever fridge recommends a dish based on what's available and talks to the cooker and the chef about what's to come and the steps to take. The cooker, in turn, can tell the dishwasher what load to expect when all the cooking is done.

The InstaView ThinQ boasts a 29-inch display (that goes see-through when you want to see inside the fridge) and effectively acts as a big Echo Show, with Alexa barking out the recipe steps. This display can also stream Amazon Music, Spotify and the like too.

However, this is where it starts to get a bit complicated. The fridge is actually powered by LG's webOS - meaning it's not just one platform in the mix but two. Actually, it's three as LG's new 2018 TV range, and the new LG ThinQ Speaker, have Google Assistant on board and can act as a hub for your smart home devices.

The TVs actually offer Alexa controls too - but not for all the TV functionality, and you won't get the on screen visuals you'd get if you stick to Google's Assistant. Some controls on the LG TV - such as searching YouTube - are actually powered by webOS as well, and you'll need to push a button on a remote control to get the TV to listen to you.

Confused? Good - then it's not just us.

What is cool is that LG has big visions for the future when it comes to AI. Instead of mere controllers, it wants its connected home kit to be clever - to learn and to be a genuine assistant in your house.

We're all for LG jumping feet first into this brave new world - and embracing an open approach to smart home platforms. But the criticism we hear most often about the connected home is how it's juts too complicated.

Announcements like this from LG that, let's face it, are as clear as mud, don't help that situation - no matter how cool and cutting edge the devices are.