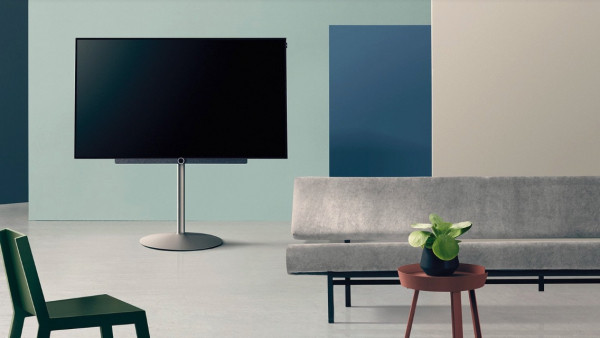 The statement TV is one of the biggest design trends for the smart home for 2018 and Loewe tends not to disappoint with its luxury smart TVs.

Its latest model, the minimal Bild 3.65 is a 65-inch 4K OLED TV which can be mounted on the wall, on a console or on Loewe's range of brushed aluminium floorstands, coming in graphite or light grey fabric finishes.

Loewe's TV smarts include built-in streaming apps Netflix, Amazon Prime Video, YouTube, Tidal and BBC iPlayer plus extras like your Apple TV, PlayStation or Sky Q box can be stuck to the home screen too. The Ultra HD display itself measures just 4.6mm and in terms of high end specs, you get HDR 10, Dolby Vision and Loewe's upscaling tech on board.

Elsewhere, there's an integrated soundbar with 2 x 40W stereo speakers, a Digital Audio Link interface to hook up to surround sound and Bluetooth connectivity to connect to phones and headphones. Plus there's magnetic rear cable covers if you're concerned about living room clutter. No built-in voice assistants as yet but Loewe TVs do support Amazon Alexa commands and it's said to be looking further into wireless audio between its TVs and speakers.

We're still waiting for the final product of the flagship Loewe Bild X which creative director Bodo Sperlein says should land by the end of 2018 or thereabouts. The Bild 3.65 costs ┬Ż4,290, is on sale now and the Bild 3 series also includes 55-inch (OLED), 49-inch (LED) and 43-inch (LED) sizes.