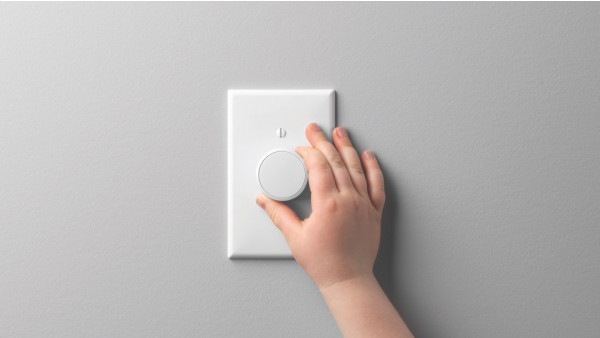 You know the feeling - you ask your assistant to turn on your smart lighting but the power is cut off at the source. Well, Lutron has revealed a dimmer switch to help combat the problem.

Working with Signify's Philips Hue, the Lutron Aurora works by fitting over your traditional light switch and, in turn, giving you always-on access to your bulbs. It's wireless and battery-powered, with the knob on the Aurora able to be twisted to dim or brighten the lights, and preventing the switch behind it from being turned off.

Read next: The ultimate guide to Philips Hue

The company claims the dimmer can be installed in under two minutes, with the mounting base essentially locking your existing toggle switch in an 'on' position. And since Lutron is joining the Friends of Hue program, it's also working from the same Zigbee standard - meaning a Wi-Fi outage, for example, won't affect the Aurora.

As we know from using the Philips Hue Dimmer and Tap switches, not having to go through the Hue app to tinker with your lighting can actually be really handy. Add this to the fact the Aurora goes over your dumb switch, meaning you can still light up the room from the same position as you usually would, and the smart dimmer appears to be an attractive prospect.

If you're thinking about adding it to your smart home, you can pre-order it from Hue, with shipments expected to land in June. Naturally, you'll also be able to pick up the Aurora, which is only available in white, on Amazon, Best Buy and The Home Depot, too, once it's launched.