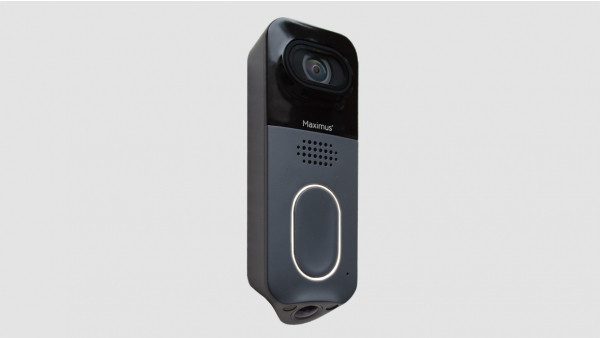 Most smart doorbells are racing toward feature parity, going with night vision, HDR, 1080p cameras and improved. For the most part, companies try to offer wide-angle lens so that they can see more of your porch.

Maximus is ignoring all of that and outfitting its new smart doorbell, fittingly called the DualCam, with dual cameras. There's one main 1080p camera up at the top with the usual features, like HDR, 180-degree field of view, motion detection and such.

Read this: All the announcements from CES 2019

But then on the bottom of the device there's a second camera pointed downward, which is there to keep an eye on your packages. In the companion app, which I got to check out at CES 2019, the two video feeds are synced together. You can view the whole image as one, or you can navigate around either the top or bottom individually.

The entire idea is to eliminate as many blind spots as possible offer a full view of what's happening on your porch. The DualCam can also detect packages when they're dropped off. There's also two-way communication with echo cancellation, and Maximus says that speaker is music quality. You can use it to play custom greetings and messages. Plus, there's both Alexa and Google Assistant integration.

The company also says it uses less power and latency than other smart doorbells, and that you can call emergency services directly from the app if you see a robber or a guy licking your doorbell for three hours.

You'll get a two-hour window to download and look at footage for free - after that it's deleted, or you'll need to have a paid storage plan. The DualCam will be available for $199 later this year.