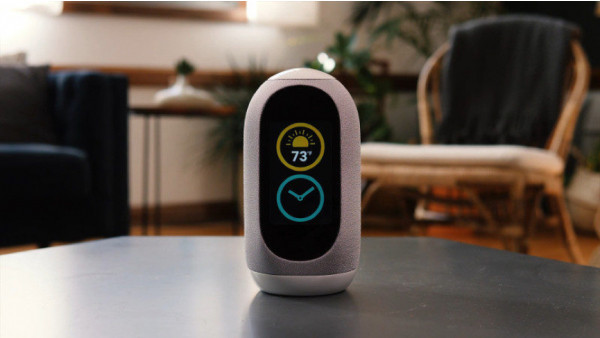 One of the biggest concerns about the smart home is privacy, especially when it comes to always listening smart speakers - hella useful but something that some people just don't want in their living room when tech giants like Amazon or Google are attached.

Enter Mycroft and its Mark II smart speaker. The open source, voice controlled speaker, which also rocks a 4-inch LCD touchscreen display, is live on Kickstarter now and its big selling point is that Mycroft deletes your data as soon as it's processed and won't sell your data either.

It's already passed its ┬Ż35k goal and though the early bird units have gone, you can pick one up for $129 or, if you're handy with a PCB, $99 for a build it yourself kit. Estimated delivery is December 2018 so you've got a ways to wait.

Read this: What's stopping Amazon and Google recording us 24/7?

Back to the device and it's close to matching what you get in an Echo-type speaker, though we can't vouch for audio quality yet. There's six far-field microphones to pick up voice commands from across the room, a 10-watt speaker with two two-inch drivers inside and a 3.5mm audio jack to hook it up to other speakers. There's Wi-Fi onboard, Bluetooth (to act as a Bluetooth speaker not to link to other speakers wirelessly) and a microSD card slot.

Of course, the really tough stuff is building an AI voice assistant, not the hardware. Essentially the Mark II will use a bunch of open source voice and machine learning technologies including the Precise library (for wake word), Mozilla DeepSpeech (speech to text), Adapt, Padatious (natural language understanding), Mimic (text to speech) and Python. If you want to try it out, you can download Mycroft for Android, Linux and Raspberry Pi with Windows and Mac coming soon.

Sticking with voice, the wake word is "Hey, Mycroft" but this can be customised plus you can choose from American Female or British Male voices right now with more choices promised. The platform already has a decent set of 140 Skills including Philips Hue, Wink, Pandora, Twitter, Roku, Facebook, NPR, Gmail, Wikipedia, Wolfram Alpha and... DuckDuckGo.

One potential pitfall here is that Alexa and Google Assistant make themselves more useful by learning information about the user over time - so expect not to have this contextual element from something like Mycroft which deletes the voice data. If you're happy with a speaker that simply responds to your very specific commands, though, that won't be a problem.

The 17-strong Mycroft team, based in Kansas City, calls itself a "neutral player" and "the Switzerland of voice assistants". Here's the privacy sell: "At Mycroft, we delete the recordings as they come in, unless you actively choose to share your data by opting into our open data set...

"The difference between us and the Big Tech Giants is our business model. We want to provide voice services to our members, the others have business plans around targeting you with advertisements or selling you goods and services. We donŌĆÖt create ads or sell your data to anyone who does. Our software is open so anyone can inspect the code and see exactly what we are doing with user data."