The company revealed its new Learning Series at CES 2020 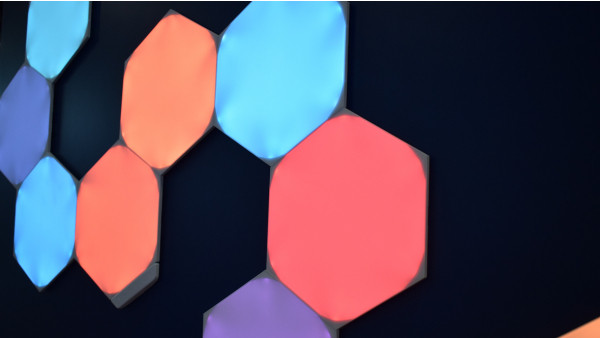 Smart light maker Nanoleaf has always done things a little differently from Philips Hue and co, eschewing traditional bulbs and instead focusing on modular lighting tiles that affix to the wall to form interesting patterns.

At CES 2020 the company finally confirmed when we'll be able to get our hands on its new hexagonal lights, while also revealing a new product category.

Let's start with those new Hexagon Unified Light Panels, which Nanoleaf says will go on sale this summer. The new panels allow you to slot the six-sided shapes together to form unique patterns.

Like previous Nanoleaf lights, these will also work as touch panels that you can tap to trigger lighting scenes, or even use them to control other connected smart home devices.

What's unique about the hexagonal panels (other than the shape obviously) is that they're "Unified" ŌĆō which means you'll be able to use them with other "Unified" Nanoleaf products to mix and match different shapes.

This hasn't been possible until now, but Nanoleaf told us that all of its future smart lighting panels will offer this same compatibility, so you'll be able to buy a Nanoleaf panel safe in the knowledge you can chuck it in with your existing lights.

Read this: The best smart lights 2021

The new hexagons have a new way to connect to one another too, using double-sided tape and a plastic mount that snaps on.

Nanoleaf will be selling the hexagon lights in a 9-pack for $119.99 this summer, with 3-panel extension packs available for $59.99.

The second thing Nanoleaf announced at CES wasn't a new shape, or even a panel. The company says it's developing a new range of smart lights that it's calling the Learning Series, which "learns, senses and reacts" to the user and their surrounding environment.

It's all quite vague, and we're none the wiser having dropped by Nanoleaf's booth at CES, but it sounds like it will be pre-empting things you might ask your smart assistant.

So maybe instead of asking Alexa to turn on the lights when you get home, the Nanoleaf lights will detect you're nearby, check the time, and do it anyway. Or perhaps it will adjust the lighting depending on the weather outside.