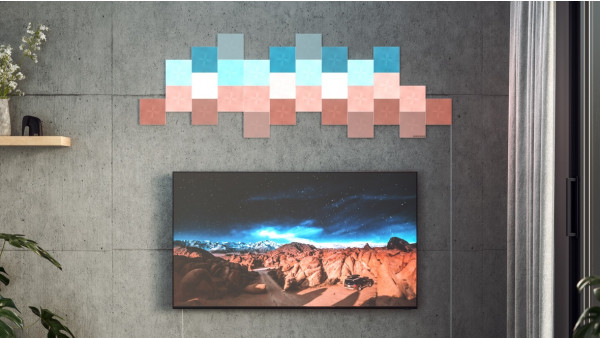 Nanoleaf's array of smart lighting panels will soon be able to match what's showing on a TV or computer screen, thanks to a new Screen Mirror feature.

Replicating what we've seen from the likes of Philips Hue, those with Light Panels or Canvas will now be able to boot up the new Nanoleaf Desktop App, link a HDMI cable to the TV and use 'Match' mode to help the lights mirror exactly what's showing on the TV.

Read next: Complete guide to Nanoleaf

If you want something a little less dramatic, there's also a 'Melt' mode that transitions a little slower. Not only can Screen Mirror be used for TV shows and films, but games can also be linked up to the lights.

In the desktop app, layout rotations are customizable, too, meaning users can set only half the panels to react to the screen, or even set the effect to show upside down.

Interestingly, aside from the Screen Mirror feature, the desktop app can also be used in an offline mode, letting owners control the lights even if they can't link up the internet.

Nanoleaf also suggests the desktop portal was designed to help simplify management and control for those with larger installations in their home.

The only real disappointment with Screen Mirror is that it isn't compatible with Netflix on the Mac version of the desktop app, so don't get your hopes up of seeing the Stranger Things palette displayed on your wall unless you're using it via Windows.

And, as we mentioned up top, while it's a feature we've longed for from Nanoleaf's feature lighting kit, it's not the only bit of smart lighting able to match your TV - Philips Hue Sync was launched last year, and with the arrival of the Hue Sync Box, you don't even need to connect your computer via HDMI.

The feature is live now, so get started by downloading the Nanoleaf desktop app.