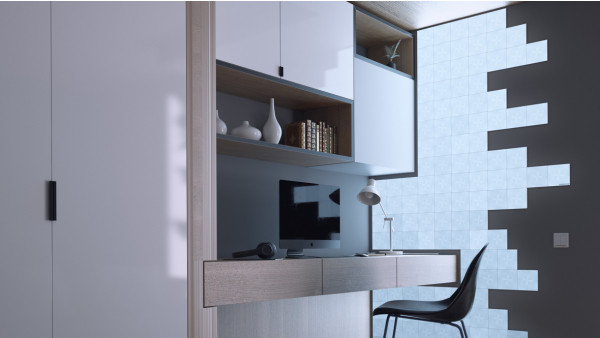 The smart home is going round in circles. First, we used our phone to control everything - who needs switches? Next, we used our voice for everything - smartphones are so last minute. Now, we're back to switches - smart buttons, to be more precise. And today Nanoleaf launches perhaps the prettiest button yet.

The pioneer of artistic smart lighting, Nanoleaf has just announced an upgrade to its Canvas modular lighting system that turns each panel into an Apple HomeKit smart button.

Complete guide: Everything to know about Nanoleaf

Called "Touch Actions," the over-the-air update will let you activate your HomeKit devices and scenes just by touching one of the light squares. Any of the up to 500 panels on the square Canvas layout can be turned into a touch-reactive ŌĆ£smart button,ŌĆØ allowing you to control your HomeKit home without the use of a phone, or having to struggle with Siri.

Possible setups include picking a square on a Canvas above your bed to trigger a ŌĆ£Good MorningŌĆØ scene that boosts the Canvas to bright, cranks up the A/C, and starts the kettle boiling. Choose one for a "Good Night" scene and have it lock your doors, turn all the lights off, and dim your Canvas.

Basically each square can be programmed to do whatever you can do in your Home app on your phone. Plus, there are three touch options per square - single press, double press , and long press - which you could choose to customize based on time of day or brightness levels.

Touch Actions only works on the Canvas system, not the standard Nanoleaf kit, and it joins Nanoleaf's Remote, which has 12 sides that you can program to different HomeKit scenes. As with the Remote, you program the Touch Actions with the Nanoleaf App and the Home App, you also need a HomeKit hub. The update goes live today, so make sure you have version 1.4.0 or above of Nanoleaf Canvas and 3.4.0 or above of the Nanoleaf iOS App.