Alexa, what are my internet speeds? 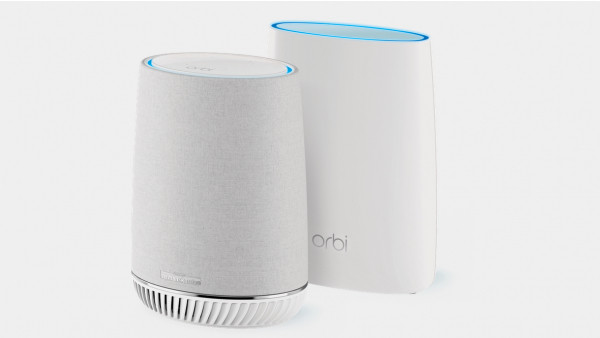 Alexa has slowly seeped into all manner of devices. It's in light switches, thermostats, cars, sound bars, TVs and plenty more. It was only a matter of time before Alexa made its way into the unsung hero of a smart home: A Wi-Fi router.

Netgear is making it happen with its new Orbi mesh Wi-Fi system, called the - lets take a deep breath now - Orbi Voice Smart Speaker and WiFi Mesh Satellite with built-in Amazon Alexa. It's a mouthful, but it's actually only two devices. There's the Orbi Wi-Fi router, and then Orbi Voice, which is a sound speaker with sound tech from Harman Kardon.

The Orbi Voice packs Netgear's mesh technology in with a front-facing woofer, a tweeter, a bass reflex port and far-field microphones - in a four-mic array - to pick up your voice. Naturally, you'll be able to use Alexa to do Alexa things, like play music from Spotify and Amazon Music, or control your Fire TV, or check on the weather.

Unfortunately, it doesn't seem like Alexa is gaining any Orbi-specific powers like telling you your internet speed. Or if it does, Netgear isn't talking about it yet. And don't fret, if you've already got an Orbi system you won't need to buy this one to add Alexa smarts. The Orbi Voice will be going on sale separately in the fall so that you can add it to your existing system.

The Wi-Fi portion of the Orbi system can support speeds of up to 3Gbps and coverage in homes up to 4,500 feet. Setup is handled through the app, and you can use the Orbi app to use its Circle smart parental controls to monitor your kids internet usage. No word on whether you can use Alexa to check in on that, but we've reached out to Netgear to ask.

The Orbi Voice Smart Speaker and Mesh WiFi Satellite is up for pre-order now for $429.99 and will ship 21 September. The standalone Orbi Voice will be ┬Ż279.99.