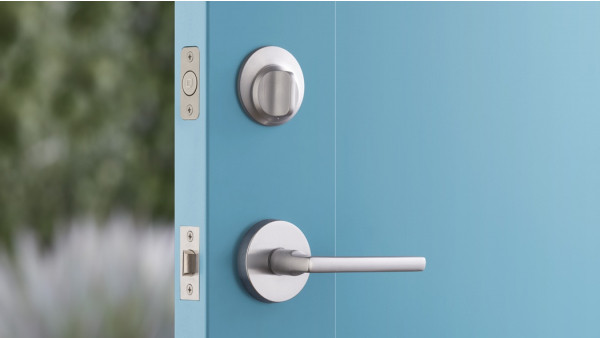 Level, the makers of one of the most innovative smart locks on the market, is innovating once more, becoming the first connected door lock to be Amazon Sidewalk enabled.

The company unveiled its newest smart lock today, the Level Lock and told The Ambient that its entire lineup of smart locks will be compatible with Sidewalk, Amazon's new smart home network designed to improve connectivity with smart devices on the edges of, or outside your home.

This brings Alexa compatibility to the company's line of super small smart locks, which previously only worked with Apple's HomeKit. It also makes Level one of only a handful of locks that can be accessed from within the Ring app, letting you lock and unlock your door while viewing video from your doorbell.

Read this: What is Amazon's Sidewalk?

The new Level Lock sits between the company's Level Bolt and Level Touch locks and costs $249.

It takes the Level Bolt's hardware (all the smarts and the CR2 battery are packed into the internal mechanism of the lock) and the Level Touch's aesthetic (you swap out your whole lock not just the internal portion) to produce a similarly small, sleek smart lock.

As with the other locks, the Level Lock can be set to unlock as you approach, through an app, or with your voice through Apple's Siri and now Amazon's Alexa. It also works with a traditional key.

Level's locks pack all the smarts inside the deadbolt, meaning no bulky housing on the back of your door.

Unlike Level Touch, there's no captive key housing - meaning there's no touch-to-unlock or NFC card compatibility for accessing the lock with a touch of a finger or a tap of a card.

However, you pay $70 less, and at $249 it's more in line price-wise with smart locks from August, Yale, and Schlage.

The new Level Lock will work with the Level, Ring, and Apple Home apps.

The Alexa integration is based on Sidewalk, so will only work if you have a Sidewalk-enabled Ring doorbell (currently only the Ring Video Doorbell Pro models, but more will be compatible soon via firmware upgrades, according to Level).

"Users who also own a Ring Video Doorbell Pro will be able to use their voice to ask Alexa to lock, unlock, or update them on the status of their lock," explained Level Founder and Chief Technology Officer Ken Goto in an interview with The Ambient. You won't be able to add the locks to Alexa Routines, however, as it doesn't show up in the Alexa app. "At this point the only connection to Level Lock through Alexa is via voice," says Goto.

The doorbell will essentially act as a hub or bridge for the Bluetooth-powered lock, allowing remote access and other smart home features.

So, if you own both a Level Lock and a Ring Video Doorbell Pro you will be able to monitor and use Level Lock remotely in both the Level Home and Ring apps, as well as use Alexa for voice control.

You do have to have Sidewalk enabled on your compatible Ring or Alexa device for these features. Level also works with Apple's HomeKit in a similar manner if you have a HomeKit hub such as a HomePod mini or Apple TV.

We asked about Apple's new HomeKeys pass announced at WWDC this month, but Goto declined to comment, same with any news on Matter compatibility.

The only feature we feel is missing now from this excellent lock lineup is a keypad - something we noted in our review of the Level Touch. When asked, Goto said "We donŌĆÖt have any keypad plans that we can share with you at this time." So, there's hope!