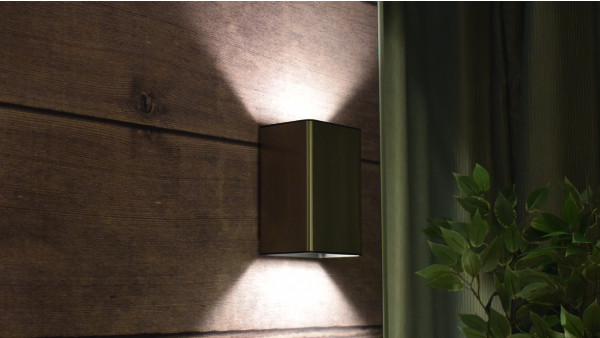 Signify was firing on all cylinders through 2019 with its Philipe Hue range, so we weren't expecting big things from the smart light company at CES 2020. Nonetheless, it came to Vegas to show off a few new outdoor lights and announce some other notable updates.

Let's start with those three new outdoor lights, our favorite of which is the wall-mounted Appear. The $139.99 cylindrical fixture splashes a triangle of light out of the top and bottom, and supports the entire Hue color spectrum.

Europe will instead get the Attract, which has a glass fixture to create an arc of light. Europe also gets the Resonate, a boxier version of Appear.

Appear and Resonate side by side

There's also a new spotlight called the Lily XL ($139.99), launching in both territories, but we're more into the new Econic pedestal light, which comes in at $129.99 and is US-only.

There's also more just for the Europeans: Daylo, a circular outdoor light fixture, and Nyro, a downward-firing light in a more rectangular fixture.

We really love the Nyro, despite it looking a bit 2001: A Space Odyssey as a path light, but it also comes in a wall-mounted option if you prefer.

Hue launched a lot of indoor lighting towards the end of last year, so it makes sense that it would focus on the great outdoors at CES and have them ready for the spring/summer.

All of these will start rolling out to Europe in the coming weeks and months, with the Appear, Lily XL, and Econic to hit the States from mid March. Signify is also launching a new 100W outdoor power supply unit that will be able to power up to 12 units.

But that's not all. Signify also announced some small updates to the Hue app: you'll now see the battery life of your Hue accessories (so no more getting caught out when they die), and it's also bringing the zones feature out of beta, meaning you'll be able to use accessories like the Hue Smart Button to control multiple lights in groups either within a room, or across different rooms.

Finally, there's an update coming to the Hue Play HDMI Sync Box that will allow you to control it using any infrared control or using Alexa/Google Assistant/Siri. That update will come this spring, while the app updates are rolling out now.