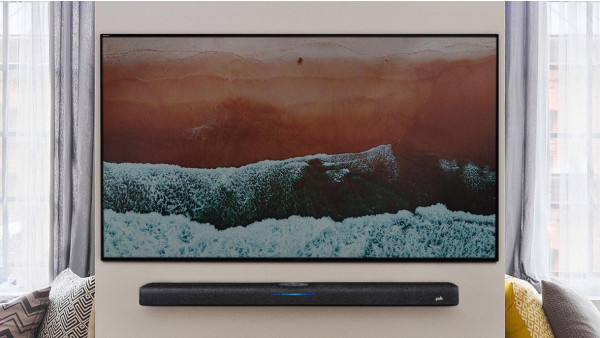 Alexa Multi-Room Music (MRM) is having quite a moment. After being pretty stagnant since it was announced a couple of years back, we've seen a plethora of smart speakers arriving in 2021 supporting the platform.

The latest of which, the Polk React, has some pretty big claims too; it's billed as "the worldŌĆÖs most advanced Alexa-enabled soundbar."

That boast is because it packs in four far-field microphones and AmazonŌĆÖs proprietary wake-word-detection and echo-cancellation software.

It's also compatible with native Amazon Echo smart speakers for communication features such as Drop Ins, Calling and Announcements.

The new React may lack the Dolby Atmos smarts of its Alexa Multi-Room Music rivals, such as the JBL Bar 5.0 MultiBeam and the Denon Home Sound Bar 550, but it's also a darn site cheaper too, with a $249 launch price.

No Atmos doesn't mean the Polk React won't be a perfectly capable TV soundbar, with Dolby Digital and DTS 5.1 supported and, if you want something more 'real' then you can add Polk Audio SR2 wireless rear surround speakers and/or the React Sub wireless subwoofer to the mix for a genuine 5.1 setup.

It's got as HDMI ARC around the back, making it super simple to hook it up to your TV and act as the speaker for all your HDMI sources and, crucially for anyone with a TV on a cabinet, it's got a super-low 57mm profile so it shouldn't block those all-important IR beams.

There's also an optical port if that makes more sense in your AV setup.

The Polk React goes on sale next month, you can pre-order it now. As mentioned, it's $249.

Stay tuned to The Ambient for a full Polk React review soon.