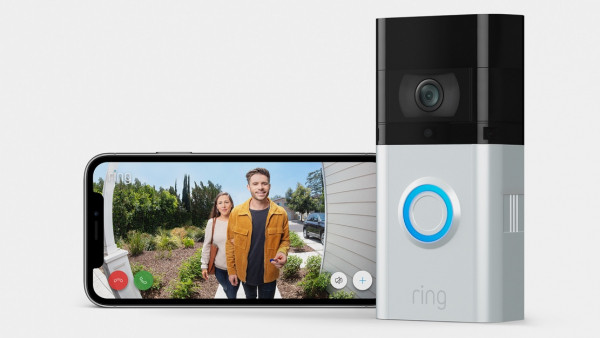 Ring has taken the covers off of its latest smart home security devices - the Ring Video Doorbell 3, and Doorbell 3 Plus, have been revealed alongside newly designed Chime and Chime Pro models.

Starting with the Ring Video Doorbell 3 Plus, because it's the standout device from the new launches, and it features the Amazon-owned brand's new Pre-Roll feature, which shows you four seconds of footage from before motion is detected from your smart doorbell; with the idea that you can get more context behind what triggered an alert.

However, rather than this four seconds being color, HD footage - thus impacting on battery life and bandwidth - it's instead just black and white, low frame rate footage that's actually captured by a different camera to the main Ring video recordings. In fact, the setup features a three-camera array.

As well as the new Pre-Roll footage, which is only on the Plus model, the Video Doorbell 3 also adds a better motion detection area setting, with closer sightings being able to be more prominent; which is good news for anyone who's been annoyed about unnecessary alerts from passing cars and pedestrians outside their houses.

Another neat upgrade is the inclusion of dual band Wi-Fi, with both 2.4GHz and 5GHz bands now supported.

Alongside the new video doorbells, Ring has also updated its Chime and Chime Pro accessories, with all-new designs for both; and a new nightlight function on the Pro.

All of these new devices are available to pre-order now - with shipping set to commence on 8 April Stateside and 28 April in the UK.

Pricing is as follows: