Roku made a soundbar that doubles as a streaming box

IFA 2019: And launches a subwoofer alongside it 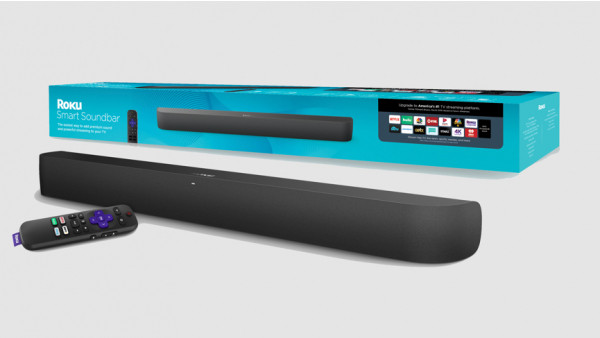 Let's start with the most interesting of the two, the soundbar, which we're promised delivers nice, rich, room-filling sound with its four 2.5-inch speakers. We can't vouch for the quality ourselves, but it's certainly going to be an upgrade on your built-in TV speakers. But here's where Roku's bar really stands apart: it's also a Roku streaming device.

In fact, it's essentially a Roku Ultra wrapped in a soundbar, so you'll be able to do everything that box can do, 4K streaming and all, running on the Roku OS. However, unlike Roku's wireless TV speakers, the soundbar will work with any TV, connecting via the HDMI ARC port (or optical audio if you don't have ARC privileges). All of which is to say, the Roku soundbar can turn any "dumb" TV smart and give it an audio upgrade at the same time. Clever.

There's support for Dolby Audio here, but not for Dolby Atmos. And unlike the Polk Command or the Sonos Beam, there's no voice assistant built into the soundbar itself, however the remote has a mic so you can voice search for movies and shows. You'll also be able to link the Roku with Google Assistant or Alexa, meaning you can control it from other smart speakers.

If you do want to build out the sound, Roku is also launching its Wireless Subwoofer, which can be connected to the soundbar over Wi-Fi for a kick of bass. Once connected, the soundbar will redirect all that bass over to the Subwoofer, no matter where it's placed in the room. It will eventually be compatible with Roku's wireless TV speakers, but not at launch.

While the soundbar alone isn't quite as powerful as Roku's wireless speakers, the fact it can work with any TV, not just a Roku, make it much more appealing, particularly when you factor in that subwoofer. Both the soundbar and subwoofer cost $179 each and will be available to buy mid-October.

Roku's got some heated competition, however, with Amazon announcing a range of new Fire TV sets, a Fire TV soundbar, and an upgraded Fire TV Cube.