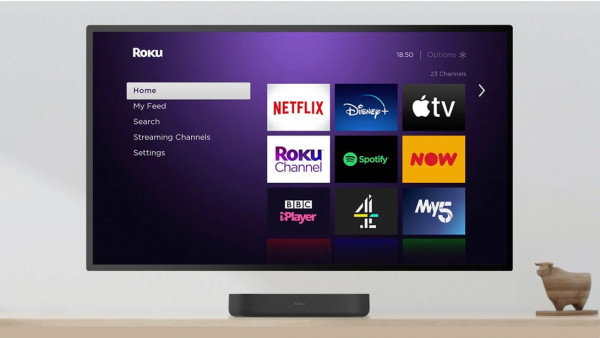 Roku has made its latest new streaming devices official - the Roku Streambar has been revealed along with a upgraded Roku Ultra streaming box.

Starting with the Streambar and it's a compact smart soundbar that comes in half the length of the company's previous TV speaker - 14 inches compared to 32.

The Roku Streambar is able to stream 4K HDR visuals from the likes of Netflix, Apple TV+ and Prime Video on 4K compatible TVs and, if you think the compact form factor isn't up to the audio those visuals deserve then you can also pair it up for surround sound with a Roku Wireless Subwoofer and / or some Roku Wireless Speakers.

Sound quality should be pretty decent though - the streaming specialist assures us that the four built-in Dolby Audio speakers are able to "produce sound well beyond its size while increasing speech clarity and adding intricate depth to music."

There's no built-in voice assistant but the new Streambar is able to be controlled using either Amazon Alexa or the Google Assistant.

It also acts as a Bluetooth speaker and is compatible with with Spotify Connect.

The revamped Roku Ultra adds Dolby Vision HDR to the Dolby Atmos skills that were introduced with last year's model.

With a 50% wireless range improvement on its predecessor, the 2020 Ultra also, like the Streambar, plays nicely with both Alexa and the Google Assistant.

Roku has also revealed that, later this year, Apple AirPlay 2 and HomeKit capabilities are going to start landing on "select 4K Roku devices" - we'll keep you posted on that.

You can pre-order them now and shipping will begin in October.