Samsung made a vertical smart TV to appease those pesky millennials

Spin it round and it becomes a giant smartphone 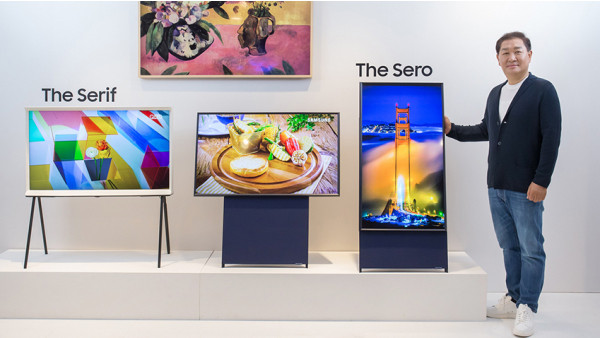 There are two defining behaviors of the millennial: they love their social media and they live the vertical life. As a millennial myself, I can confirm it.

Samsung wants to appeal to this smartphone-obsessed generation with its new Sero smart TV, a 43-inch quantum-dot, QLED set that can be rotated from landscape to portrait mode. Why? So you can view Instagram, Snapchat and other smartphone videos on the big screen, but still as God intended.

Read this: The best streaming services for your smart TV

In horizontal mode the TV works like a "regular" Samsung TV featuring 4.1-channel, 60W speakers and the unrelenting Bixby - but flip it around, connect your smartphone via the Sero's NFC, and you can beam your Instagram stories and TikTok videos to the big screen.

The set swivels on an integrated navy stand that becomes flush with the screen when it's turned vertically. In fact, the whole look reminds us a little of the Facebook Portal.

The Sero joins a line of more experimental Samsung TVs including The Frame, which tries to blend its box into its surroundings. While The Sero seems a tad ridiculous at first blush, there's something to be said for making better use of the TV screen when it's not in use. So joke as we might, we're not going to bet against this one.

Samsung's going to sell the Sero in South Korea in May for 1.9 million won, which converts to about $1,600. No word on whether this will break out of the country, but if it becomes a hit, you can guarantee it will.