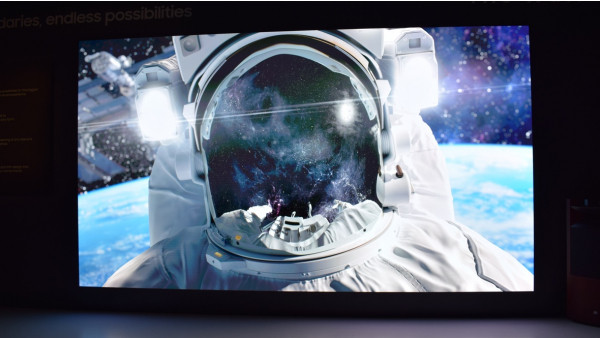 Remember last year when Samsung launched its 146-inch modular wall? Remember how we mocked its diminutive proportions? Us neither, but Samsung's going even bigger in 2019 with a 219-inch version of its mammoth television.

Samsung is having a really good think about what the television - and living room - of the future will look like. We know it will be smart: Samsung has shrewdly added support for Google Assistant and Alexa in its 2019 TVs, even though you'll need a separate smart speaker to use them (only Bixby gets baked-in privileges). We also know it will be a future where Apple's services run on Samsung TVs, something we might not have dreamed possible a week ago.

And we know they'll have some amazing MicroLED technology that makes viewing angles wide and colors all the richer - as Samsung proudly showed us in Vegas.

But it's Samsung's ideas around TV design and modularity that really grabbed our eyeballs. At its CES unveiling, the company showed off a "smaller" version of its wall TV called ŌĆ£The WindowŌĆØ, a 75-inch Micro LED TV with eye-bleeding color (and no doubt an eye-watering cost). Both The Wall and The Window are made using 12-inch x 12-inch Micro LED displays that can be assembled however you like. No really - Samsung wants you to do it yourself.

That means an aspect ratio of your own design. That means a long, thin TV stretching from one side of the room to the other if you damn well please. That means watching The Wire in its original 4:3, baby. Samsung says its Micro LED displays scale to increase the resolution as you add more, while the density remains consistent. It also says they offer twice the color purity of conventional LED displays

Transforming TVs could prove more practical for the smart living room of the future, and even if this is still in the conceptual stage, we hope it will encourage other TV manufacturers to think a little more outside the box. Samsung's not the only company dreaming up a modular future: Nanoleaf has been doing it awhile with its smart lighting.

In other news, the 2019 version of Samsung's The Frame - an Ambient award winner - will get the quantum-dot treatment, the company said, meaning better, brighter colors. No arguments here.

As ever, Samsung's CES show was a lot of flash with few concrete details. But it's possible that your next smart TV - or the one after that - could be one you build yourself.