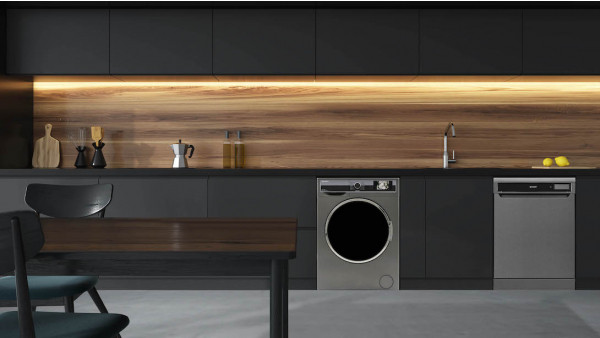 You remember Sharp, right? Your nan had a Sharp TV - had all four channels on it. Your dad had a Sharp Hi-Fi that could handle six CDs at once. Your mate had a green and yellow Man Utd shirt with SHARP written across the front - and CANTONA, 7, on the back.

Well Sharp is back from the 90s (it never went away to be fair, it's a big deal in Japan) with a bang - an Alexa flavoured bang, with a connected kitchen range.

The imaginatively titled, Sharp Smart Range that Works with Alexa, includes a 75 litre oven, a four door fridge-freezer, a dishwasher and a 10Kg washing machine.

Now, Sharp hasn't gone as far as the likes of LG by baking Alexa into the appliances themselves, rather it's Alexa integration through a skill... so you'll need an Echo speaker to power proceedings with your voice.

The commands include things like choosing certain modes - super cool on the fridge, heat boost on the oven, and so on - and also starting things off in the first place. The smart washing machine even throws in Amazon Dash Replenishment features too - so you won't run out of detergent.

There's no word on pricing or launch dates as of yet - but we'll keep you posted.