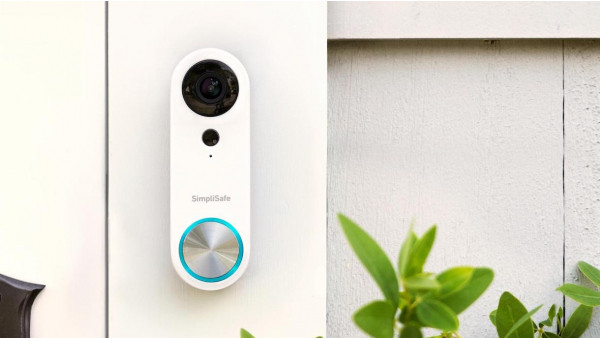 SimpliSafe is one of the more popular smart home security systems out there, offering good functionality with simple setup and an affordable price. And now it's venturing outside of the home.

The new Video Doorbell Pro is its first smart doorbell, and it comes with a 162-degree wide angle lens, which is slightly bigger than the 160-degree field of view on the Nest Hello or any of Ring's doorbells.

In addition to 1080p HDR video and night vision mode, SimpliSafe is using a unique dual-sensor motion trigger that activates the camera. There's a PIR sensor that can detect human heat and an image classification sensor that detects the shape of a human body.

Together, the two sensors are aimed at cutting down false alerts and better distinguishing humans from things like passing cars or animals. The PIR sensor is live now, but the image classification sensor will be rolled out in a software update in the next few weeks.

Once that dual-sensor triggers the camera, you'll get footage from before, during and after the motion occurs. You will have to subscribe for video recording, at either $5 a month for one camera or $10 a month for unlimited cameras (if you have SimpliSafe's indoor security cameras).

The Video Doorbell Pro also slips into SimpliSafe's existing smart home security system, which is Works With Nest compatible. SimpliSafe has announced that integrations with Google Assistant, Alexa, August and Apple Watch are on the way, but those aren't live yet.

Naturally, the Video Doorbell Pro also has two-way audio communication and a door chime. It bears a striking resemblance to the Nest Hello, which also sports a long oval design, and was designed in collaboration with IDEO, the firm SimpliSafe turned to to help redesign its new line smart security products.

The Video Doorbell Pro requires an existing doorbell setup to work, and SimpliSafe says it'll work with any doorbell setup out there - old or new - so you won't have to worry about your wiring being out of date.

SimpliSafe's Video Doorbell Pro is available now for $169 from the company's website and Best Buys across the US. Best Buy will also have optional faceplates in green, black and white that you can purchase, with additional options coming later.