Sky's service is getting improved voice control and AI recs too 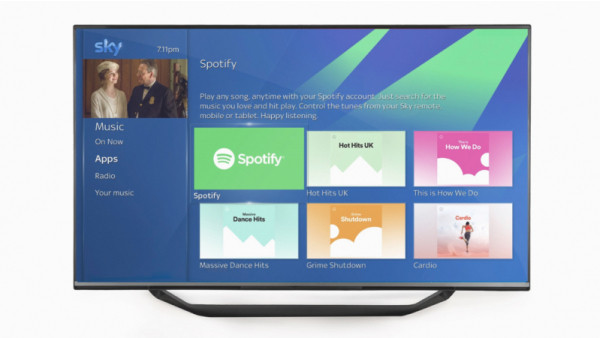 Spotify has now arrived on Sky Q boxes. You'll find the new app on your homescreen if you're a Sky Q subscriber in the UK and Ireland. It's available for both free and premium Spotify users - just log in to get started - plus you can stream music to Bluetooth and AirPlay speakers as well as Sky's own Soundbox.

The addition makes SkyŌĆÖs play as a home entertainment all rounder and smart home provider even more compelling. Sky has already offered its budget Soundbox (┬Ż299 down from ┬Ż799) to customers, and coupled with AirPlay support, its service is a great way for people to listen to tunes from Spotify in their living room.

WhatŌĆÖs more, with the improved voice control that's coming later in 2018, it should mean that an Alexa-type scenario of on-demand music shouldnŌĆÖt be too far from reality.

Also hitting Sky Q alongside Spotify is a redesigned "widescreen" user interface making it easier to scroll through TV and movie suggestions. It's part of the raft of new features Sky announced in February, including leveraging voice control and artificial intelligence to improve recommendations.

If you don't know what Sky Q is, it's the companyŌĆÖs premium service, which offers 4K channels and the ability to stream recorded and on-demand content to any device in your home, which it calls Fluid Viewing. Sky Q also features the ability to operate as a Wi-Fi mesh in your home, for faster wireless and, ultimately, smoother streaming.

In addition to doubling the amount on UHD content available to viewers, later in 2018 we'll see Sky update its voice control feature to include content recommendation. That means users will be able to request ŌĆ£show movies for meŌĆØ and access information from Sky Q apps, such as ŌĆ£what is the weather today?ŌĆØ

Sky has always focused on content recommendation and thatŌĆÖs part and parcel of the updates. The company says itŌĆÖs using machine learning algorithms to recommend programmes based on your watching habits, taking into account time of day and other factors ŌĆō finally acknowledging that what we watch in the morning is different to late at night.

And those with 4K TVs will appreciate the addition of HDR (high dynamic range), which should make a vast different to picture quality ŌĆō and should silence those on AV forums, who have been calling for it since Sky QŌĆÖs debut back in 2016.

Sky isnŌĆÖt exactly moving at electric pace in the smart home, but itŌĆÖs certainly building towards being a key component. Powerful Wi-Fi mesh capabilities, dealbreaker apps like Spotify, a central and valued position in the home and the ability to work across all your screens mean itŌĆÖs in an enviable position.

While building in Alexa / Google Assistant could make that really effective, Sky might just try to go it alone. And with Comcast interested in buying Sky as part of a jump into Europe, it could be a dark horse in the smart home race.