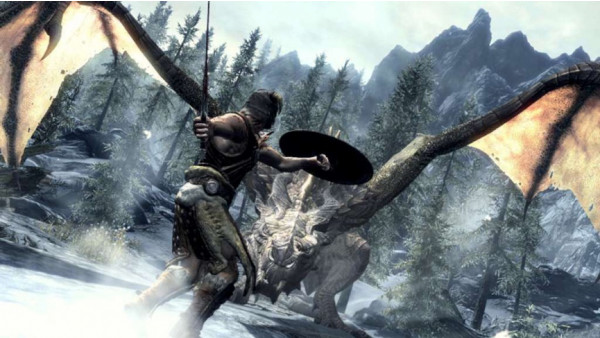 Announced by Bethesda at this year's E3 gaming expo via a comedy trailer with Keegan Michael-Key (below), for a few hours the internet thought the news was a joke: "Yes, thatŌĆÖs right, the version of Skyrim you never saw coming has finally arrived on the platform you never asked for."

Then people started trying out the command for the Alexa skill and - it works, you can play along a quest, explore dungeons and fight dragons. And Skyrim fans seem to love it, just check out all the five stars and comments.

Once you're in with the free to play skill, you can use commands like "use shout" and "attack with weapon" to continue your journey from your living room. It's not the first attempt at interactive Alexa entertainment - the BBC and Earplay already have interesting branching narrative skills for Amazon's voice assistant but this is obviously the most high profile.

We've tried activating the skill with our Amazon Echo in the UK and no dice (because we don't get anything nice on time). But a fair few Alexa users, including PC Gamer, have now uploaded videos to YouTube and Twitter showing the voice command based gameplay.

It's not as fluid a back and forth as Keegan Michael-Key gets in his promo bit, Alexa gives you options to choose from - and if you improv more than a simple "yes" or "no" answer you might run into trouble. Still, looks like you can now play Skyrim on Alexa because 2018.

No confirmation yet on that Etch-a-Sketch port but we wouldn't be surprised if The Elder Scrolls on a smart fridge is in our future.