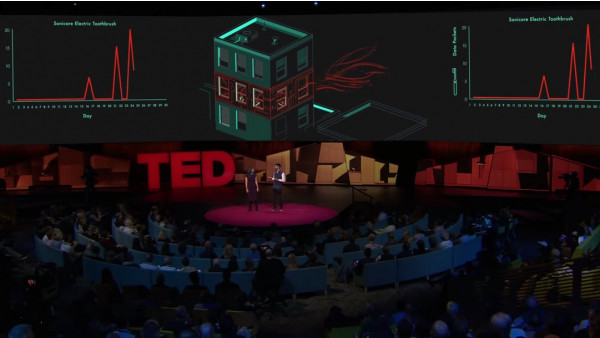 The connected home is far from defined, we don't know how much tech we'll allow into our living spaces yet or what form it will take. So that means now is the time to throw all the wacky ideas out there.

We've picked out six interesting TED Talks that talk about how we're living in our homes today and how that's about to change. Aside from tech nobility Tony Fadell, it's a not a spec nerd-heavy bunch with a mixture of ideas from designers, scientists and architects instead.

This is the findings from a journalist duo's attempt to discover just what a smart home learns about its occupants.

They fitted out a home with 18 different smart devices and added a device to track how often they contacted their servers and see what they were reporting back. The results were a little bit shocking, truth be told.

Fadell may no longer be employed by Google but everyone wants to know what the founder of Nest (and inventor of the iPod) thinks about product design in tech. In this talk from March 2015 - which has been viewed over two million times - Fadell talks about tips for product designers, including noticing small, everyday habits, with examples including a brief version story of where the idea for the first Nest Learning Thermostat came from:

"People were not saving any energy because they just couldn't predict the future. So what did we do? We put a machine-learning algorithm in instead of the programming that would simply watch when you turned it up and down, when you liked a certain temperature when you got up, or when you went away. And you know what? It worked. People are saving energy without any programming."

This talk by Leila Takayama, a social scientist at the University of California, Santa Cruz, and founder of Hoku Labs, is a delight. She starts off thinking about what is and isn't a robot in the home - if your robot vacuum qualifies then maybe so should your dishwasher.

But Takayama's ideas here centre on telepresence robots as extensions of ourselves, which interfaces work in social and work settings and how they could build empathy for both people different to us and robots themselves.

One of the biggest conversations in digital parenting is how much screen time to allow children at home and the era of voice first has been seen by some as one answer to issues of distraction, isolation and dodgy online videos.

Here Sara DeWitt, a VP at PBS Kids Digital, argues that screen time can actually be good for kids whether that's mobile games that can spark imagination; text alerts to parents on their children's progress in fun learning apps or granular insight for teachers.

Julio Gil on city life in the country (11 mins)

UPS industrial engineering manager Julio Gil takes apart the reasons people feel they need to live in a city - jobs, socialising, access to stuff and services - and then explains how new tech can allow people in the country to get in on the action too.

Working from home using augmented reality or telepresence robots; drone deliveries of anything you need and a mix of social media and getting to know your actual neighbours.

Looking a little further ahead (in time and space), in this talk from November 2016 architect Xavier De Kestelier outlines one potential scheme for building homes for the Moon or even Mars.

In his projects for NASA and the ESA, he proposed domes made from 3D printed moon dust and swarms of robots that could move sand from Earth around on the surface of another planet. Makes rigging up a house with no Wi-Fi black spots seem easy, right?

Scott Galloway, a professor at the NYU Stern School of Business, encapsulates a lot of the fear, bad feeling and hate towards Amazon, Google, Facebook and Apple in one spicy talk. As well as employing Alexa for a skit about the Whole Foods acquisition, Galloway also goes in on emotional manipulation and which organs each of the biggest tech companies represent:

Worth mulling over next time you go voice shopping.