This smart bedside table is a nightlight, wireless charger and - fridge?

Sobro's Smart Side Table has useful features and then some 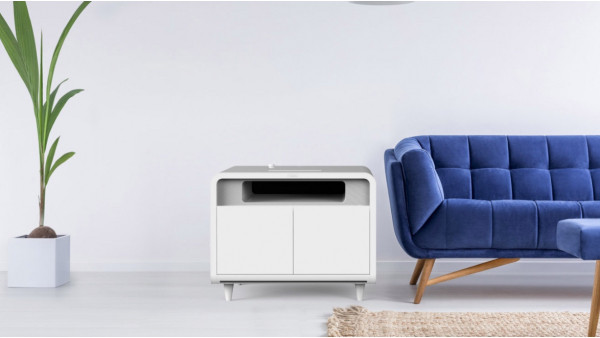 Ikea's wireless charging tables got nothing on this. The Sobro Smart Side Table is on Indiegogo now for $349. What does that get you? Well, some quite neat features like a motion sensing LED strip nightlight, in warm or bright white, that comes on when you get out of bed and wireless charging for two devices built into the top.

There's also USB and USB-C charging ports, built-in Wi-Fi, IFTTT compatibility as well as app controlled, colour changing, accent lighting round the back which can be set to a sunrise mode via Sobro's sleep focused app.

So far, so good. But StoreBound, the team behind this connected table, didn't stop there.

Read this: The smart furniture edit for early 2018

Built-in stereo Bluetooth speakers are on board, we're not sure how we feel about that. There's also a built-in fridge - well, thermoelectric cooler drawer - which is apparently for drinks. And an app controlled, locked storage drawer for...?

You get the idea - we'd love to see a simpler version of this but hey, StoreBound has already raised $268,000 on its campaign with a month left to go and there's still a few $299 Early Bird rewards left.

The Smart Side Table is measures in at 19 x 19.75 inches and is adjustable in height to 24 or 29 inches. If the team reaches its $1 million stretch goal, it will offer matte black and white/walnut finishes alongside the standard white model. Shipping is set for October 2018.

StoreBound has previous form in successfully crowdfunding and building smart furniture so it's a safer bet than most. Its even more brotastic, bachelor pad-friendly Sobro Cooler Coffee Table raised over $1.6 million from over 2,000 backers on Indiegogo and shipped within six months in October 2017. They're also responsible for the PancakeBot pancake printer - make of that what you will.