The latest Sonos speaker goes live, with a bunch of nifty new functions 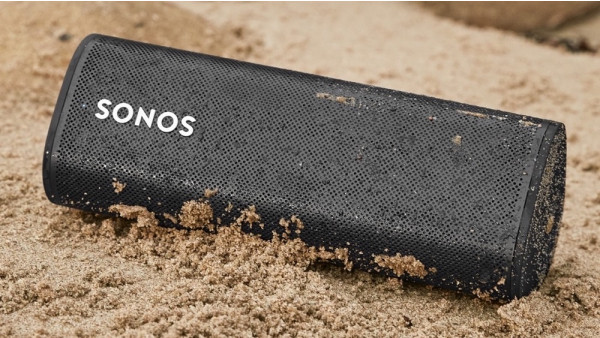 The Sonos Roam speaker has hit officialdom - after weeks of rumor, speculation and leaks galore - and it's the mini Bluetooth brethren to the Move that we were all expecting.

Sonos' smallest speaker to date, the Roam measures in at just 6.61 x 2.44 x 2.36-inches; it's a curved triangular speaker that weighs less than a pound.

Obviously, the idea behind it being so compact is that it's designed to be taken out and about. Sure, the Sonos Move - the multi-room speaker specialist's first Bluetooth speaker - was capable of being transported (the clue was in the name) but it's an absolute beast of a speaker (that's also pretty pricey at $399).

The $169 Roam, on the other hand, could easily be slipped into a beach bag, sports holdall or suitcase, and accompany you to the pool, picnic, gym, park... wherever you want to take it really.

It's got a 10-hour battery life and, unlike the Move, doesn't require a proprietary charging input; it's regular old USB-C that juices it up.

There is an optional charging dock should you wish; that's $49 - but the good news is the Roam is Qi compatible, so you'll be able to get a much cheaper (albeit not design-matched) wireless charger for it. The native one has a magnet though, for optimal stability.

Like the Move, it's capable of being a regular Bluetooth speaker, while at the same time able to become part of your regular Sonos system with its Wi-Fi mode.

However, it actually trumps the Move on the Bluetooth front as it's able to be on both Bluetooth and Wi-Fi mode at the same time.

You are also able, using a new feature called 'Sound Swap', able to fire the audio from your Roam to a nearby Sonos speaker by simply holding down the play button.

This is a super handy feature for when you're taking the party indoors, for example and you want the music to carry on, on your better speakers. Sonos uses the ultrasonic frequency of nearby speakers to work out what the best speaker is to Swap with. Clever stuff.

The Sonos Roam, like the Move, offers Automatic Trueplay. If you're an iPhone user and have ever set up a Sonos speaker before, you'll recall the somewhat-strange process of walking around the room waving your phone around to tune to acoustics, like some sort of audio exorcist.

Sonos has now built that technology into the speaker so it adjusts dynamically to its surroundings, registering all of the different reflection patterns of each individual space (this can be turned off if you'd prefer).

Sonos is keen to point out that, despite its teeny-tiny form factor, sound quality is high. On that front there are a pair of class-H amplifiers, a custom racetrack mid-woofer and a tweeter all built in.

Both Alexa and the Google Assistant are available for voice commands - you'll need to choose one or the other - when on Wi-Fi mode and the Sonos Roam is also an AirPlay 2 speaker, so you'll be able to get your Sonos speaker singing and dancing within your Apple speaker setup.

You can pair a couple of Roams for a stereo Sonos setup - but only in Wi-Fi mode. However, we're told they aren't compatible as part of a Sonos surround sound TV setup.

The Roam is IP67 rated, which means it's fully dustproof and waterproof in up to one meter of water for up to 30 minutes; so a bit of rain or a splash from a pool shouldn't do it any harm.

The Sonos Roam will be available from 20 April, priced at $169. You can pre-order the Roam right now, it comes in black or white.