These Hidden Senses pieces respond to your touch and movement 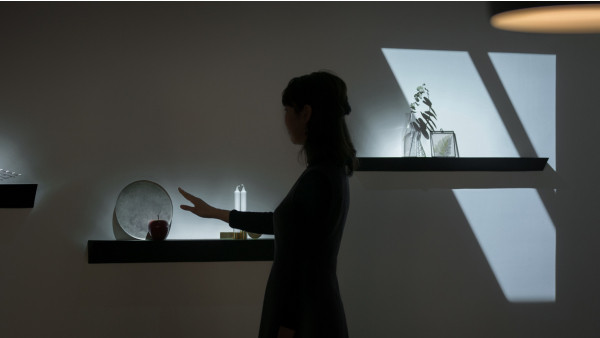 Sony is back with a new series of experiments looking at how we interact with the objects in our homes. Its new Hidden Senses installation is at Milan Design Week from 17 to 22 April and includes interactive lighting, shelving and benches that respond to touch, gestures and movement.

Unlike Sony's Glass Sound Speaker and Ultra Short Throw Projector, we're not expecting any of these concepts to go on sale as fully realised products just yet. But the exhibition does give us an idea of where Sony's design team is headed when it comes to natural, playful interactions with technology in the home.

Most of the ideas seem to be focused around altering the mood, music, decoration and ambience of the room in interesting ways. So you can shake the Swing Lamp (see video) to change up its colour and pattern. Or place an object on the Material Shelf to have the built-in display on the surface mimic the appearance of whatever you've chosen to put down.

Sony says that it is exploring how to use objects placed on a surface as an "intuitive yet physical interface", something we've seen in the wacky Xperia Touch projector already.

We quite like the idea of the Mood Driver, a stylish disc that also acts as a partition. The idea is that by simply turning it, you can change or mute music and light scenes to quickly alter the mood in the room. Like a luxe smart button.

Elsewhere, the Dancing Light is a floorlight with sensors that will respond to your movements (as its name suggests) and a wall light can detect your distance too.

Plus the Tactile Tray and Tactile Bench concepts give you physical feedback - we haven't tried any of this out yet but Sony says the feel and movement of the material responds to the user's touch.

How immediately useful any of these designs could be in the connected home remains to be seen but we can't wait to try Sony's Hidden Senses concepts out. Plus if you like the look of any of these designs, it's worth noting that Sony has pretty strong previous form, particularly in semi-smartwatches, smart earbuds and those projectors, in working slightly crazy ideas into real tech products.