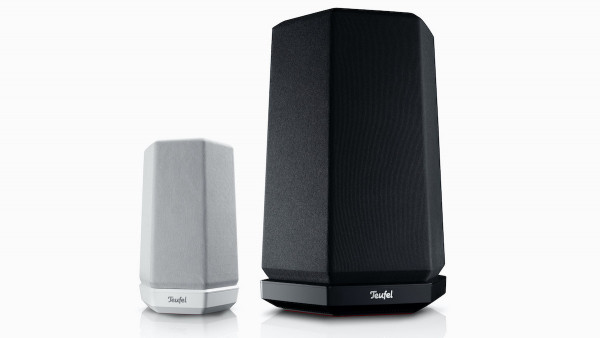 Voice assistants built into high end speakers are fast becoming the norm and the latest audio specialist to jump on the smart speaker bandwagon is German company Teufel, with the Hotlist M and the Hotlist S.

With Alexa baked in, the Hotlist M is a $500 flagship that will take on the likes of the Sonos Arc or the Google Assistant-powered Bang & Olufsen Beosound Balance for high end smart speaker supremacy.

The Hotlist M and S are a pair super stylish hexagonal shaped bookshelf speakers; the M is the taller of the two at 40cm - compared to 22.5cm on the S - and the M can also be fixed to an optional stand.

Both speakers have the touch panel up top for controls, along with the Alexa light and microphones for picking up your voice commands.

At around half the price of the M, you'd expect some compromises with the S (which is a 2-way system with 5 drivers) in terms of audio ability and you'd be right.

You can also set the full range driver, which faces forward to 'Wide' or 'Direct' for a spatial sound or spoken content such as audiobooks, podcasts and talk radio.

There is a companion Hotlist app for easy access to streaming services such as Amazon Music, Tidal and Spotify but, with these being Alexa smart speakers, you can, of course, use Amazon's digital assistant to request music from different sources with your voice or via the Alexa app. Both speakers also have Bluetooth on board.

Both the Teufel Hotlist S and the Hotlist M are on sale now.