Type with Alexa makes you and your assistant texting buddies

You can now send messages to Alexa using your keyboard 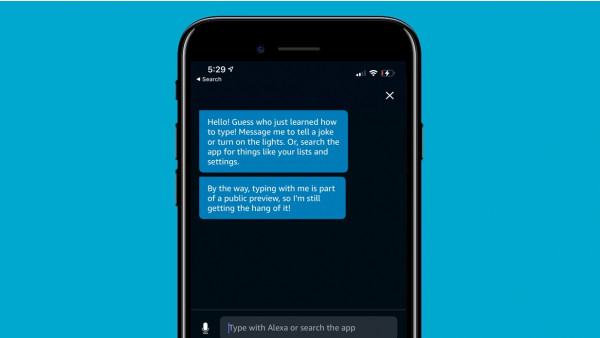 Amazon is rolling out a new feature within its smart home app. Type with Alexa allows you to send messages to your digital assistant using a keyboard and text messages, rather than using your voice.

The new feature, which is rolling out as part of a public preview - The Ambient contributor Jennifer Pattison Tuohy noticed it pop up on her phone - means you can send discreet messages to Alexa for occasions when your voice might not be the best option; think cinemas, on the train, at a funeral and so on.

Sure, you could already search within the app for Alexa Routines and smart home device controls, but the new keyboard based input also allows you to ask queries such as diary updates, calculations, news headlines and the like - as well as acting as a pretty nifty search tool for smart home routines and devices with your Alexa ecosystem.

If you've been selected to be part of the public preview then you'll see a little keyboard icon appear in the top left corner of the Alexa app. Tap it, and you and Alexa will be IMing like old pals.

Of course, you can already do this with the Google Assistant - and have been able to for a long time - but it's still a neat addition to Amazon's voice assistant.

Albeit a bit of a basic one; there are no visual indicators or Show-like graphics as there are when you type queries and commands to the Google Assistant.

Although Alexa will attempt to guess what you're going to type based on your initial keyboard input. For example, if you type "turn" then the AI behind the Type with Alexa will decipher that you might want to turn the lights on or off.

We've no idea yet how and where it is rolling out exactly - we'll keep you posted on that.