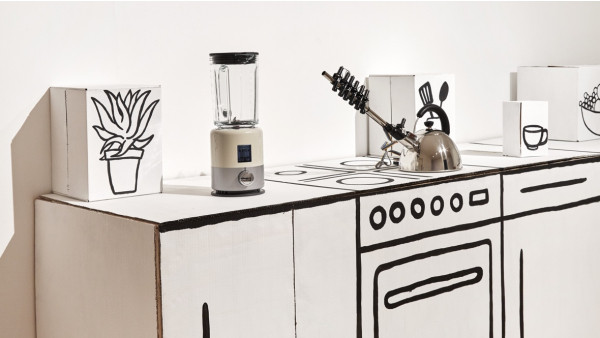 Sound artist and designer Yuri Suzuki has found a novel solution to the whirring, rumbling and droning of our modern kitchen gadgets - turn it into music.

His playful exhibition Furniture Music has done just that. The attempt to "re-design the domestic soundscape" features a Musical Kettle, a Singing Washing Machine and Blender (pictured) alongside a table that amplifies the sound of anything on its surface, such as people tapping their fingers, via an acoustic chamber.

The Musical Kettle has been physically modified to become a hybrid instrument so that it plays music out of its spout as it boils. And both the washing machine and the blender, amongst the noisiest household appliances, now play music as they perform their tasks.

The idea is to "propose ways for sound to not turn into noise but rather help enhance harmony and comfort" in our surrounds. The title Furniture Music is inspired by French composer and pianist Eric Satie which Suzuki says is "the original ambient music" - he's also inspired by Brian Eno.

Suzuki, who has worked with the BBC's Radiophonic Workshop and Disney Research, has also been showing off one of his previous projects, his White Noise machine which records and then distorts people's voices alongside his installation Sound of the Waves.

It's interesting to think about sound as a key component of the ambient, always-on smart home - companies like Sonos and Ikea are explicitly pushing this idea in terms of multi-room, connected music streaming and their 'future home sound' collab is due in 2019. But why not extend it to devices which already produce, in this case irritating, sound?

The noise pollution struggle is real - inside and outside the home. Researchers are now suggesting it could be the new secondhand smoke, with noise above 50 decibels leading to stress, anxiety and worse. Despite the bells and whistles of this year's connected home appliances, sound isn't always a priority.

Still, there is some work going on to quieten down our shiny new tech - Dyson's 360 Eye robot vacuum has a neat 'quiet mode' which decreases both the suction and noise and, back in the kitchen, Bosch has a range of quiet washing machines that keep the noise down to 47 decibels via its EcoSilence Drive motor.

You can also look for the Quiet Mark badge on noisy products such as coffee machines, air purifiers and extractor fans in stores like John Lewis. It was developed in conjunction with the UK's Noise Abatement Society which encourages tech companies to focus on noise reduction. Perhaps in the future Suzuki's musical appliance concepts will get their own badge.