If the flagship Echo Show is too big for you, this one will be just right 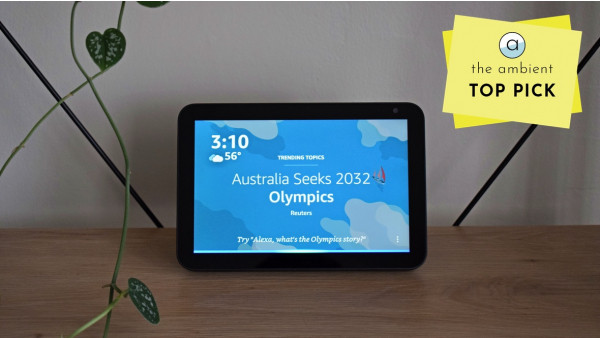 When Amazon launched the first Echo Show in 2017, it was the starting pistol for a race to build the perfect smart display, and everyone else followed accordingly. Hell, even Facebook has one now.

In the time since, Amazon's family of Echo Show devices have not only evolved, but increased in numbers. There are now three sizes to choose from, with the Echo Show 8 the newest of the bunch.

The Show 8 is actually the middle child here, nestled between the 10-inch Echo Show and the Echo Show 5 which, it could be argued, are too large or too small, respectively.

If you're of either opinion, the Show 8 finds a comfortable middle ground for Alexa. It's also $100 cheaper than the flagship Show.

Having tested the Show 5 and larger "flagship" Show, we've turned our attention to the Show 8. Here's our full review.

The Show 8 is, for the most part, the same as the other two Echo Shows ŌĆō just with different proportions. It has a - you guessed it - 8-inch screen, placing it right between Amazon's 5.5-inch and 10-inch smart displays.

Price when reviewed
$129
Buy on Amazon

Indulge us for a moment while we talk screen sizes, because this has felt like an ongoing experiment by Amazon and others.

The first Echo ShowŌĆÖs display measured just 7 inches, but lived in a rather bulky (and quite horrible) housing. The second-gen model knocked it all the way up to 10 inches with a much-improved overall design, but Google's Nest Hub, launched at the same time, packed a 7-inch display into a much smaller device ŌĆō and for a long time felt like the new 'sweet spot'.

But things change, and we've now seen the light: the Show 8 is, in our humble opinion, the best size of smart display. It has the same 1280 x 800 pixel resolution as the larger speaker, meaning it looks sharper on the Show 8 ŌĆō even if it's still not full HD.

If you have good eyesight, the 8-inch screen is sharp enough to read news headlines or messages from across the room. And while it sadly doesn't have the color-adjusting ambient tech of the Google Nest Hubs, the adaptive brightness works perfectly well.

Like the Show 5, but not the Show 10, you also get the physical camera shutter, which slides over the lens in times you want to ensure total privacy. ItŌĆÖs a good peace-of-mind tool that the larger one lacks.

Amazon has installed a pair of 2-inch speakers into the Show 8, which are just a smidge smaller than the ones in the 10-inch model ŌĆō and sound surprisingly good.

WeŌĆÖve been trained to lower our expectations when it comes to audio on these sorts of devices, but weŌĆÖve found ourselves listening to music on our Show 8 on several occasions, despite our Sonos system being within reach. Definitely a big improvement over the Show 5.

That said, youŌĆÖll probably want to tweak the EQ settings in the app when going louder. Knocking RadioheadŌĆÖs The National Anthem up high, we found the bass got pretty murky, but at least you have the option to adjust the balance.

Sadly, video features are where the Echo Show falls down. The major services are currently limited to Amazon Prime Video (duh), Hulu, and NBC; no Netflix or HBO.

We might care less about these omissions if the 8-inch display didn't happen to be just big enough to justify watching a quick episode of something while cooking.

But most frustrating is the YouTube experience, which only works inside a browser and is clumsy at best, annoying at worst. Despite Amazon and Google making up somewhat, the YouTube app still hasn't made it to the Echo Show devices.

Also, Alexa tends to get stuck in the YouTube browser, by which we mean it will process any query as a video search rather than a general question ŌĆō so youŌĆÖll need to exit out of the browser entirely. All in all, it needs work.

There aren't many spec differences between the Show 8 and flagship Echo Show, but the camera does take a step down from five megapixels to one megapixel.

In our experience, it doesn't actually feel like a major downgrade (the person we called said we looked "fine") unless you're someone who video calls with your Show a lot, in which case you may want to consider a different smart display altogether.

Both the Google Nest Hub Max and Facebook Portal offer much better camera technology than the Show 8, chiefly the ability to follow you around the room.

There are two far-field microphones on the Show 8, and we've found them to be pretty sensitive for picking up our voice when asking for Alexa's attention, or for taking a call.

What you do lose by opting for the Show 8 over its bigger sibling is the Zigbee hub. How much this matters will depend on how much of a smart home you currently run, and how you run it.

It downgrades the Show 8's ability to work as a smart home hub, but you'll still be able to control all of your Wi-Fi-connected gadgets, including those that run off other hubs. You just won't be able to use the Show 8 as a hub for, say, your Hue lights.

When sat idle, the Show 8 can scroll through a series of stock artworks or photos, but you can have it display your own pictures if you connect your Facebook or Amazon Photos account. But you certainly don't have to link anything; in fact, the Show 8 can be set up entirely on-device, without using your phone at all.

The other reason you may want an Echo Show over one of Amazon's screen-less Echo speakers is for Alexa's visual enhancements.

For example, asking for the weather will prompt the assistant to display a forecast for the week ahead, or asking for movie showtimes will produce a list. There are moments like this where it's much faster to absorb the information visually rather than hear Alexa trot out the next 50 showing times for Ford v Ferrari.

We've also tried running recipes on the Show 8, and while the Alexa controls are pretty fluid ŌĆō "next step," "last step," "scroll down" ŌĆō we just don't find it an effective way to follow recipes.

Most of the time we've found something better when searching with our phone or laptop, instead. This isn't an Echo Show 8 thing, but a smart display thing in general.

However, we have to say that being able to launch into a cooking video for some better visual guidance is helpful ŌĆō and another reason we wish the YouTube experience was better.

Amazon Echo Show 8
The Amazon Echo Show 8 hits the sweet spot, and it's easily the Alexa smart display we'd recommend for most use cases. The Show 5 may be better on a nightstand, but overall the Show 8 is the superior smart display. You don't get a Zigbee hub and some specs are cut back over the larger Show, but for most people this is the Show we'd recommend.
PROS
CONS
TAGGED    amazon