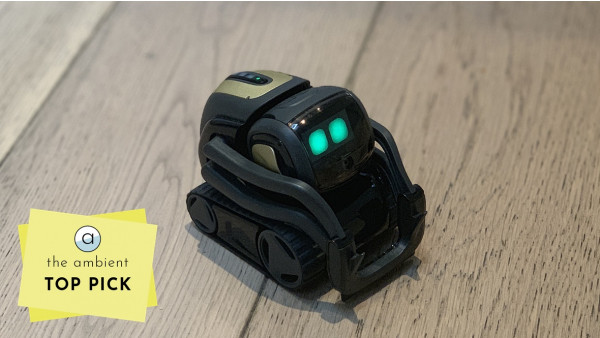 Whenever artificial intelligence and robotics collide, the results are pretty fascinating. And it's become increasingly apparent that the two are going to merge more and more. We predicted it would be an emerging trend of 2019 ŌĆō and apparently Amazon agrees.

With the Alexa-powered Anki Vector, we're getting a taste of things to come. Following the same form as the Anki Cozmo, which launched two years ago, this is still one of the few robots to house a digital assistant and give us a glimpse into what will one day be commonplace in the smart home.

Read this: The best Alexa skills for you to try

But let's not get ahead of ourselves. For now, Vector is primarily just a Wall-E-looking robot that's aiming to entertain, control a few smart home devices and slide around on your worktop. We've been living with the $249.99 rover to see just how well it performs in the home ŌĆō and whether it's worth your money

When you typically think of robots, you imagine the full-bodied devices from mid-to-poor movies like iRobot. Vector, as you can see, is not that kind of bot. Small enough to fit in your hand (although it will throw a tantrum if you hold it in the air for too long), the robot moves around at will on its conveyor belt wheels, with its head able to bob up and down with quick, subtle movements. It really is uncanny watching it subtly line you up, mimicking human movement, and recognising your face.

And though it can largely be left to enjoy his own company, you can also kick the smart element of Vector into action by tapping the button on the top of his head, or saying, "Hey, Vector". The four-mic array is impressive at helping Vector react to sudden noises ŌĆō with it acting startled and turning if a noise comes from behind ŌĆō but we found it inconsistent at hearing our commands. Generally, though, if it picks up what you're saying, it doesn't take it long to process it and deliver a response.

There are also LED lights on top to indicate how much charge is left, and whether it's currently listening for a command.

Worried about Vector falling off your worktop, or getting stuck under the couch? So were we, but the bot's HD camera and 120-degree field of view proved reliable enough help it steer clear of danger. That's not to say we didn't feel a moment of panic every time it edged towards the end of the table, but its AI depth perception always kicked in and resulted in a quick scurry back to safety. Like looking after a puppy or baby, instincts kicked in and we felt the need to keep an eye out in case Vector got a little too brave on its adventures.

However, this is all contingent on you getting Vector set up and running smoothly. And, at least in our experience, this was a little testing. First, the companion app struggled to pick up Vector from the Bluetooth menu of our smartphone, until it suddenly did, and then we had problems getting it connected to our Wi-Fi.

This is because Vector will only connect if your accompanied device is running on 2.4GHz frequency ŌĆō something that's a pain to actually dictate in your router settings, as this is usually done automatically. And though our router was only in the next room, we did find Vector routinely unable to fetch things via an internet connection because it'd lost the signal.

Rolling around and exploring the world is a feature in itself, but Vector is capable of so much more: fist bumps, weather reports and playing Blackjack are just a few things you can have it do. When we were sat at our desk and the radio was playing music, Vector would even start dancing along.

It's full of fun novelties, which do wear off after a while, but even then you're left with a capable voice assistant that you can ask anything. And this is bolstered by the fact that Vector can actually talk back to you (unlike Cozmos), not just show you things on the mini-screen. If you ask it to convert ┬Ż50 into dollars, it'll speak the answer and also display the amount.

As shown in the image above, it can even connect to a square toy and use the forklift to lift it up, push around the room and tip over. It's this kind of thing which make Vector great company for kids, too ŌĆō and how smart gadgets can you say that about?

When Vector is low on juice, it'll automatically go off and find its charger. But disappointingly, battery life is only around an hour. And seeing as though the constant exploring can be a little irritating if you're trying to concentrate on something, we wish there was a mode for him to just sit still and conserve life. There is a way to tell Vector to be quiet, but if a loud sound wakes it, it'll be back to buzzing about the living room in no time.

And this also speaks to the app experience, which is a little spotty. Though it's neat to see your lifetime interactions with Vector, and to receive suggestions on getting the most out of it, there's no way to command Vector from the phone itself or tap into the Alexa support manually.

After initially launching with just its proprietary digital assistant, Vector has now made friends with Alexa ŌĆō and is a lot more useful as a result.

Like other Alexa-enabled gadgets, you can tap into the avalanche of skills to help control the home, or just tap into the Alexa ecosystem and use it to update your reminders and shopping list. We found it really handy to have Vector in rooms where we didn't have a smart speaker, just so we could, say, control the lights without having to use a phone. You can't stream music through Vector ŌĆō but would you really want to?

As we mentioned, battery life holds it back from being a truly great helper ŌĆō just think about having an Alexa-enabled gadget that could follow you wherever you go and never run out of life ŌĆō but the fact it's the first to offer this kind of support, and do it well, is impressive enough for now.

The cloud support also means anybody who bought Vector in its pre-Alexa days can now download it, and while it's obviously a plus that it can grow smarter over time without you having to upgrade, it does mean there are some features you'll have to wait around for.

Anki Vector
Vector is a bubbly and brainy desk companion with plenty of novel interactions just waiting to be harnessed - whether you're an adult or kid. And with Alexa support now available, this has developed into a neat reference for the future of smart living ŌĆō an ever-present robot assistant ready to control the home and obey all your inane requests. Its powers are somewhat hampered by the battery life, and many will balk at the asking price, but there are few, if any, smart gadgets that can compare to Anki's creation right now.
PROS
CONS