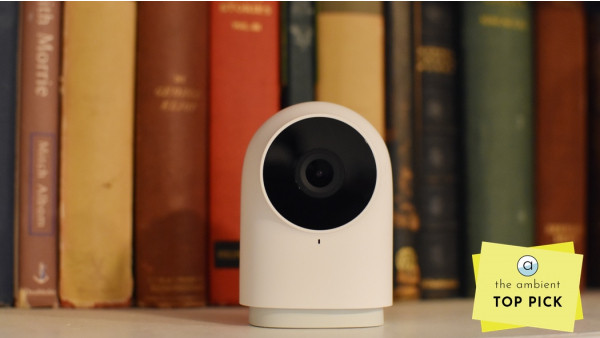 Smart home devices that do double duty make a lot of sense in our increasingly gadget-cluttered homes. So, when Aqara debuted its Aqara Camera Hub G2H - an indoor camera and smart home hub in one - we were intrigued.

As a concept, it's a lot like the Wyze Cam; they're both mini home security cameras that double as a bridge for their own smart home sensors that will work with Alexa and Google.

The Aqara cam is pricer than the $20 Wyze Cam, clocking in at $69.99, but it doesn't rely on cloud storage, and has a much wider range of compatible accessories.

Plus, it works with HomeKit Secure Video, and all those sensors show up in the Apple Home app.

Off the bat, if you're not interested in the smart home hub capabilities of this camera there are cheaper, better options out there from the likes of Eufy, which offer a wider field of view and better video quality than the 1080p HD and 140 degree angle of the Aqara, and will work with screen-enabled Alexa devices.

Price when reviewed
$69.99
Buy on Amazon

But, as an inexpensive way to add a smart camera and some smart sensors to your home, this is a top choice.

Compared to the Eve Cam and Logitech Circle View, the Aqara Cam is also one of the cheapest ways to get in on the excellent HomeKit Secure Video game - an easy to use, secure system that boasts features like facial recognition and cloud storage as part of your iCloud plan. Only the Eufy Indoor Cam beats it on price,

We put the Aqara Camera Hub G2H through its paces, read on for our full review.

A diminutive device, this camera fits in the palm of your hand, standing only 3.24 inches tall.

Sporting a smooth, white plastic case and a compact, flexible base, this feels like a substantial, well-made camera, and we love its slightly playful look. There are also yellow, blue and red versions - availability depends on what region you're shopping in.

Hardware-wise there's a small button up top for triggering a handy video message feature, camera lens with IR night vision and a motion sensor in front, and a USB power plug at the back.

The magnetic base lifts up to reveal a mount that rotates 360 degrees around and 180 up and down - so you can put this on a table, wall, or inverted on the ceiling. Under the base is the slot for a microSD card for local storage (not included).

There are two ways to set it up - through the Aqara app or directly into HomeKit using Apple's Home App.

While the Apple setup is the easiest, if you want to use any of Aqara excellent sensors (we reviewed some of them here) you'll need to use Aqara's app.

It's pretty simple, plug in the camera using the included USB cable and wall brick, download the app, log in, and tap add a device.

The camera then uses voice prompts to walk you through the process, which includes using a pin to reset the camera before pairing, scanning a QR code, and connecting to WiFi (2.4GHz only).

The app also prompts you to add the camera to HomeKit where it shows up as a camera and a motion sensor.

Installation is simple too, thanks to an included magnetic plate and 3M double sided tape (although you can use screws, but they're not included).

As we've said, the mount allows the camera to be put in pretty much any position, even once it's fixed to the wall and you can adjust the orientation of the image and turn IR night vision on or off in the app.

The biggest headache during setup is the same with any wired-cam, finding a way to hide/navigate that cable, which isn't super long - somewhat limiting your placement options.

It records based on motion or sound and will send you notifications for either or both. There's also two-way talk and a built-in siren (which can be set to play the sound of dogs barking, a police siren, and a shotgun loading, among other amusing choices).

Aqara doesn't offer cloud storage so there are no fees, instead you can store footage locally by adding an SD card (up to 32GB), use HomeKit (if you have an iPhone), or view 15 second clips in the Aqara app thanks to a 256MB onboard video cache.

Viewing videos in the app isn't intuitive, however, they're buried in a menu setting, and are only stored for 7 days (if you're not using local storage). If you record videos in the app they're also stored on your phone's camera roll.

In the camera settings you can set motion detection squares and adjust motion and sound detection sensitivity to low, medium, and high, plus you can program a "detection period" so only have your camera monitoring at night time or during certain hours.

Without HomeKit (more on that later) there are no advance AI features like person or pet detection, but you can set IFTTT-style automations to turn the camera on or off at certain times or based on certain conditions, or to record when it detects motion, sound, or if any of your connected Aqara sensors are triggered (a door opens or motion is detected).

The app also has Scenes that you can trigger with a tap, we created one to easily Arm or Disarm the camera.

A neat feature is the ability to record a message directly on the camera. Press a button on the top for a few seconds and you're prompted to ŌĆ£leave a message after the beep.ŌĆØ The camera then records for 15 seconds and saves the video in the app - but in our testing we didn't get a notification for this, making it a bit useless.

Aqara has a more standard hub you can buy that plugs directly into a wall outlet - but with the camera you're getting a twofer. The downside of Aqara's system - which we really like overall - is that it only works with Aqara devices - you can't pair Zigbee products from other manufacturers.

But any Zigbee devices paired with the camera that have HomeKit profiles will show up in HomeKit (door/window sensors, motion sensors etc.) and also in Alexa.

That HomeKit connection is another big selling point and it also has HomeKit Secure Video, which ads more customizable activity zones, person/pet detection, facial recognition (it pulls from photos in your iPhone library), and cloud storage to view your recorded videos

HomeKit Secure Video also adds the ability to automatically turn on and off the camera based on who's where. It can switch to one of four modes depending on if your phone is home or away:

The Aqara Cam also act as motion sensor in HomeKit to trigger HomeKit automations. If you add other Aqara sensors to the camera's Zigbee hub - door and window sensors, motion sensors, leak sensors and so on - you can use these to trigger automations using any other HomeKit products you have.

Video and audio quality is really good - clean images, detailed night vision and loud, clear audio with no artifacting or lag time. Motion alerts from HomeKit were immediate and include rich notifications with a snapshot of the action, but there's no sound detection in HomeKit.

The Aqara app will send push alerts based on sound as well as motion, but notifications were less speedy and don't have snapshots. Some also came through with the incorrect time on them even though we set it correctly in the app. But tapping the notifications opened the app quickly, immediately showing the recorded video.

Viewing a live feed also produced quality visuals and audio, with no buffering or lagtime. The lens does have a distortion by default (as you can see in the above video), but there is a setting in the app to correct it.

The field of view is narrower than some but fine for an indoor camera, plus, as the camera is adjustable even once installed, you can easily tweak it to get the best view of the room it's in.

To test the ZigBee hub, we paired an Aqara contact sensor, smart plug, and motion sensor to the camera. It was easy to do and the response time on all three devices was very good. And they all showed up not only in HomeKit but in Alexa too, so they can be used in Alexa Routines.

Aqara GH2 Indoor Camera
Buy on Amazon
Aqara Camera Hub G2H review
If you're looking for a solid security camera and want to enhance your smart home with some handy sensors, the Aqara G2H indoor camera is an excellent choice. Thanks to its ZigBee hub you can pair any of Aqara's good, inexpensive devices - sensors, lights, switches, and more - and kit out a really good home automation system. As a security camera, it's an excellent budget option in the HomeKit world although there are less expensive, more fully-featured choices for other ecosystems.
PROS
CONS
TAGGED    security cameras