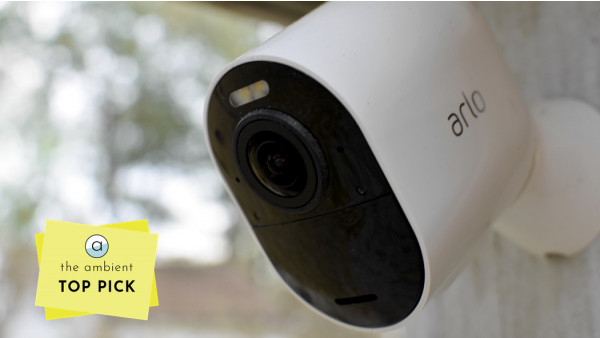 The Arlo Ultra 2 is the second generation of Arlo's flagship 4K camera. It's the company's top-of-the-line, premium model and boasts a few improvements over its predecessor the Arlo Ultra.

Chief among these are a longer battery life (6 months instead of 3 to 6), and better connectivity (it now works with 5GHz as well as boasting an increased 2.4GHz range).

The 180-degree field of view, built-in spotlight and siren, and completely wireless design are all present and correct, as is the vertiginously high price tag.

Unlike many of Arlo's new cameras - including the Arlo Pro 4 - this one does still require a connection to a Smart Hub.

It will cost you $599 to get started with an Arlo Ultra 2 kit - which gets you two cameras and a hub. Or $299 to pick up a new camera and add it to your existing hub.

This is a pricey proposition, especially in the brave new world of super cheap smart security cameras from the likes of Ring, Blink, Wyze and others.

So, should you shell out the extra cash for this premium product? We've been living with two Arlo Ultra 2 cameras and their hub for two weeks now, read on for our full review.

The Ultra 2 keeps exactly the same design as the sleek, compact Arlo Ultra and is also available in black or white.

Completely wire-free with a removable battery and a magnetic charging point for charging in-situ or connecting to an external power source, the Ultra 2 uses the same lithium-ion battery as the Ultra, and is also completely weatherproof.

It has an integrated spotlight and built-in siren, plus IR sensors for night vision (although the spotlight gets you color night vision). The camera itself is the same, with a max resolution of 4K, an 8 megapixel image sensor, HDR imaging, and an up to 180-degree field of view.

Another new feature on the Ultra 2 is dual-band WiFi. It can switch between 2.4GHz and 5 GHz WiFi, depending on how far it is from the Smart Hub. Arlo says this allows for optimized camera performance by balancing connectivity range and bandwidth.

The Ultra 2 pairs with the newest Smart Hub, the VMB5000 which can use a microSD card for local storage. The Ultra 2 is compatible with any Smart Hub model, but the 5GHz is only with the new one.

Set up requires plugging the hub into power and into your router via an Ethernet cable, then pairing each camera to the hub before installing them.

If you buy the two camera kit you get two different mounts, one magnetic and the other a screw-in mount. Both are easily adjustable and simple to install, requiring one to three screws to secure them.

Once installed you can easily remove the cameras when you need to take them down to charge. Weirdly only one charging cable is provided, which is a bit of a pain.

You can buy more - and choose from other charging accessories on Arlo's website.

As Arlo's flagship device, the Ultra 2 does everything all the other Arlo cameras do, plus some. The most important plus being crystal clear 4K footage. There's also an 180-degree field of view, 20 degrees wider than the slightly cheaper Pro 4.

In the app you can choose a narrower view, either 155 or 120, if you don't need the width, and adjusting it gets you a slightly less fish-eyed aspect, although it's barely perceptible.

Auto-zoom and track is a neat security feature only found elsewhere on the Nest IQ cameras. This is where if the camera spots motion it zooms in on it and moves with it.

We found this works best on a driveway or path area, as in our heavily-treed backyard it would get confused by a branch blowing and jump from the person walking to the tree or back to the swing blowing in the wind.

We opted to turn it off as you can zoom in manually just as effectively but we can see where it might be a useful feature. However, turning it on does delay your notifications by about 10 seconds.

A built-in spotlight can be set to turn on on motion, and either stay on continuously, pulse or strobe to really startle someone.

You can also manually trigger the siren or set it to go off anytime it detects motion. Best to use this setting only if you arm and disarm the system, otherwise you may annoy your neighbors a lot.

Arming and disarming Arlo turns your cameras off and on based on a schedule or your location using geofencing. This is an excellent feature especially if you don't like the idea of endless hours of footage of you mowing the lawn or walking in and out of your house.

Arlo's best feature however, is its cloud-based AI smart detection. You can choose to turn on one or more options, which include all motion, people, animals and vehicles, plus you can have one camera also detect packages. This can drastically cut down the amount of nuisance alerts you get.

We have five different types of security cameras on our property and 4 out of 5 send a constant barrage of notifications when a leaf blows in the wind, despite so-called smart AI features.

While they don't always get it right (my dog is often identified as a person - he's not that big), the Arlos only ping us when there is actually something going on. That's worth the price of admission right there. And of course you do have to pay for this.

In addition to smart alerts and rich notifications (where you can view the video clip in the notification), Arlo Smart also gets you custom activity zones and e911 emergency calling direct from the app.

As a battery operated camera, Arlo only records on motion, but if you plug it in to power you can set it to record 24/7. This continuous recording feature will also cost you an extra $10 to $20 a month for 14 or 30 days. An Arlo system can get pricey quickly.

The Arlo Ultra is now the only Arlo camera that requires that expensive Smart Hub. So, is it worth the extra money? The biggest advantage of a hub is local storage, but if you rely on local storage so you don't have to pay for Arlo Smart you lose some of the camera's best features.

The hub is also helps extend battery life and range. In our testing we weren't able to get the Ultras any further from our house with the hub then we were without it (we've also tested the Pro 4 and Also Essential models without the hub). However, battery life did seem to have a positive impact when connected.

A hub also lets you connect the Arlo cameras to HomeKit - allowing you to view footage in the Apple Home app, at least in theory. We were never able to get this integration to work.

It's limited in its usefulness however, as there is no HomeKit Secure Video compatibility and HomeKit downsizes video to 1080p so you lose that 4K footage you paid for.

The main reason to spend $300 on this camera rather than picking up a cheaper Pro 4 is that 4K footage. And the Ultra 2 doesn't disappoint, delivering crisp video that's consistently bright and colorful, as well as clearly defined even when there are shaded areas and bright spots due to direct sunlight, thanks to HDR Imaging.

The 12x digital zoom also lets you get up close and personal without loosing much clarity and the Ultra 2 adds in some extra wind and noise cancellation, which really improves audio quality on your footage and makes two-way audio a lot more useful, although we still got quite a bit of lag.

The addition of 5GHz Wi-Fi helps when using the Arlo indoors and close to your router (although this seems like a bit of a waste of money to be honest). But if you do use it indoors when it's connected to 5Ghz the lag time we often experienced when trying to call up live video in the app pretty much goes away.

Notifications from the app were super snappy in our testing, coming in about 4 to 6 second after the action began. But calling up a live feed is still hit or miss - sometimes taking up to 30 seconds and sometimes timing out entirely.

Recorded video plays back seamlessly though, and the app has lots of settings for tweaking your video quality, power management and placement. You can also set up multiple activity zones to even further cut down on nuisance notifications.

We do miss the addition of any pre-roll capability with Arlo cameras though, a lot of the clips we got only captured the tail end of the action, waking up too slowly to get the whole picture.

This is a downside of battery-powered cameras in general though and is the tradeoff you make for the flexibility in where you can put the camera.

Night vision was very good. There are two options - traditional IR or color night vision, the latter activated by turning on the spotlight.

We preferred the IR night vision in our backyard - where we could get much more detail over a longer distance. But for a driveway or path area the color night vision is more useful for identifying a person, you do lose some range however, and get a bit of a noisier picture.

Arlo's signature feature is its wireless design. As an entirely battery-powered device you get a ton of flexibility in where you put it. But it also means you have to charge the cameras, a lot.

The Arlo Ultra we tested previously would get about 3 weeks on a single charge, the Ultra 2 is fairing considerably better. But with cameras from Eufy and Blink boasting 1 to 2 years of battery life, Arlo needs to catch up.

For our testing we installed one Ultra 2 on the side of the house relatively close to the Smart Hub and left it alone. The other one we moved around a bit, using it to test out range and positioning. That one died at the two week mark but the stationary one is still at 43% battery after two weeks.

It's not going to make the 6 months Arlo says is feasible, but we had it on Best Video settings. On the Best Battery Life setting we could see this going 3 months at least, a definite improvement over the Ultra but still not a touch on Eufy and Blink (but those guys don't match Arlo for smarts).

In addition to HomeKit compatibility, the Ultra 2 works with Alexa and Google Assistant enabled smart screens for pulling up live security feeds on a smart display, and with SmartThings, IFTTT and Alexa for adding into smart home routines.

Arlo Ultra 2
There isn't a more fully-featured battery-powered security camera out there today than the Arlo Ultra 2. With crisp, 4K footage and total flexibility of placement thanks to an entirely wire-free design and easy to use mounts, Arlo's Ultra 2 is the ultimate smart security camera. You can literally stick these things anywhere and keep an eye on what's happening. We would like to see slightly better range, but battery life has improved and the AI-powered smart detection features are second to none, cutting down on nuisance alerts. If those things are worth the comparatively high price of Arlo to you, then you won't be disappointed.
PROS
CONS
TAGGED    security cameras    arlo