Best smart soundbars: Give your living room a boost with our top picks

We explain everything you need to know 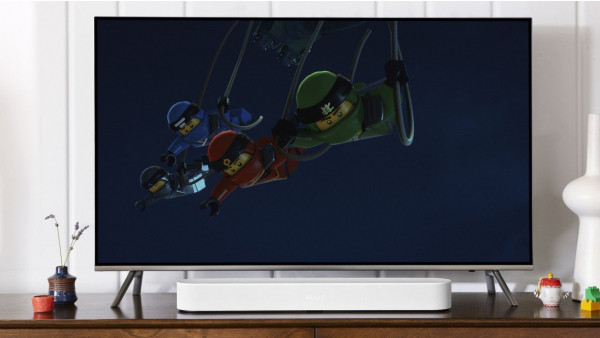 In the race to make our TVs wafer-thin, the sound quality of our television speakers has been sacrificed. Yet turning your living room into a home theatre can be an expensive headache.

Enter soundbars, the happy medium, and in the last few months we've seen several get the smart speaker treatment.

What do we mean by "smart"? We're talking features that include, but aren't limited to, voice assistants and Wi-Fi. After all, as our home speaker systems become smarter, why should soundbars be ignored ŌĆō particularly as they can often be used as part of a multi-room setup?

The first thing you want to consider is obviously sound quality. Sure, you're here because you want the smarts, but if it sounds bad, what's the point? If you're willing to splash out for more audio channels, you'll get a more rounded, clearer sound. Do you want ground-rumbling bass? Then consider something with a subwoofer. Want a more comprehensive multi-channel audio setup? Perhaps it's time to look beyond soundbars altogether.

You also need to think about how it may play with other speakers in your home. The Sonos Beam, for example, can pair with a couple of Sonos Ones and a subwoofer for 5.1 surround sound. You also want to think about the smart assistants already in your home. You probably want something that will slip in easily, maybe even make it part of a multi-room setup.

Do you want AirPlay 2? Bluetooth? These aren't guarantees, so make sure you know what you're getting.

Size also shouldn't be underestimated as a factor. The below soundbars range dramatically in width, and if space is a premium you'll want something more compact.

The Sonos Beam would be our top choice on this list for balancing sound and smarts. It now supports both Alexa and Google Assistant, as well as AirPlay 2, which makes it the most versatile we've tested.

The Beam measures just 26 inches wide ŌĆō 30% shorter than the Sonos Playbar ŌĆō and 2.7 inches high, so if space is a premium, it's a good choice. The Beam comes in either white or black, both of which have the same wraparound cloth grille, and Sonos sells a wall mount separately, should you want one.

Read this: The best AirPlay 2 speakers

In terms of ports, you've got an Ethernet port (if your Wi-Fi is sketchy) and a single HDMI port, and it works best if you have a TV with HDMI ARC support (audio return channel). If you don't, Sonos includes an optical audio adapter that will still let you use the Beam as a soundbar, but you won't get the voice controls.

There are four full-range woofers, a centre-mounted tweeter, and three passive bass radiators inside the Beam. And between the centre, left and right channels, they create a pleasantly wide soundscape with clear separation. However, the lack of a subwoofer (which you'll get with the Polk, below) is felt, though less so for watching and more for when we've used it as a music speaker. If you're willing to splash out, you can buy an additional Sonos Sub to fill this void.

As for the smarts, you can use the Beam much like you'd use any third-party Alexa/Google Assistant speaker, but the fact it's hooked up to the TV means, if you have a Fire TV or Chromecast, you can have the respective assistant open apps and start playing shows and movies.

the ambient verdict
Sonos Beam
The Sonos Beam is impressive for its size, "beaming" out marvelous audio quality for the TV. Yes, controlling the TV with Alexa and Google Assistant is great, but you'll want HDMI-ARC and, ideally, an Amazon Fire TV device or Chromecast to get the most out of it. But for those looking to upgrade their living room setup, the bonus of both assistants here gives this soundbar an added edge.
PROS
CONS

The Polk Command Bar comes with Alexa built-in, but also comes in cheaper than the Sonos Beam. It's bigger too ŌĆō 43 inches across, much longer than the 26-inch Sonos Beam. The big plus here is the bundled subwoofer which means, yes, finding more space, but it also means you're getting a much bigger wallop of bass than with the Sonos Beam.

The Command Bar looks like someone cut a hole out of a soundbar and stuck an Echo Dot in it, including the familiar bluish-green light ring. There's HDMI ARC, and optical in case your TV doesn't support it. There are two additional HDMI 2.2 ports with 4K HDR passthrough, one of which is clearly marked for a Fire TV device.

And though you have Alexa at your disposal, the Command Bar also comes with a little remote control with quick buttons for different sound modes, a volume switch and a button to activate Alexa.

We found setup a pain, to be honest, but when it was up and running the sound was a delight, thanks to two midrange/woofers and two tweeters, but they're placed way on the outside of the speaker in an attempt to get that sound away from the microphones in the centre. There's also that 6.5-inch subwoofer. It's Alexa that lets the show down, as the speaker position has a habit of obscuring Alexa's ears, which are placed right in the middle of the Command Bar. The result is that Alexa often misses what we're saying.

We didn't find the Bar as good for music as for watching, but you can loop it into a Alexa Multi-Room group should you want to. There's no AirPlay support here, but you do get Bluetooth, something you don't on the Sonos Beam.

the ambient verdict
Polk Command Bar
The Command Bar isn't perfect. It's got very good sound, especially when you're watching TV shows and movies, and will make your room shake. It's not the greatest with music, setup can be annoying and Alexa can sometimes be wonky. However, for the price, the Command Bar is hard to say no to ŌĆō especially as it comes with a subwoofer, unlike the more expensive Beam.
PROS
CONS

Harman is going all-in with Google for 2019, and its Citation Bar is one of many Assistant-supporting speakers launched by the company. First things first, the Citation Bar is very expensive. The cost of entry is $999.95, making it significantly dearer than the above two options.

Does it justify it? Yes and no. There's no doubt that the Citation Bar produces stellar sound for both viewing and listening. Really, it's a beast. It looks good doing it too ŌĆō better than the Polk Bar and arguably nicer than the Sonos, thanks to the material cover, although it's a darn sight bigger too: 45 inches across. That makes it a little longer than the Polk, too.

So yes, we'd measure up before putting this in your living room, but the size accounts for three 20mm tweeters and six racetrack woofers packed inside. The three-channel design gives this the best overall clarity of the soundbars on our list.

On top is a touch panel for switching outputs and music playback, but there's also a remote control. And it's just as well, because the Citation Bar had some problems with connectivity in our experience, whereby it would disconnect when switching between apps, meaning we'd have to re-connect it back to the HDMI ARC setting. Without the remote, that means getting up and going over to the touch panel again. Nightmare. If Harman can fix this glitch in a software update, its soundbar would be significantly improved.

Also oddly (but something the company tells us is intentional): If you're connected via AUX, Optical or one of the HDMI ports, it will mute Google Assistant on the bar, and the only way you'll be able to get its attention is using the remote. It feelsŌĆ” messy. Again, it's something that could be fixed in an update, and Harman did tell us it may change in the future. Here's hoping.

the ambient verdict
Harman Kardon Citation Bar
The Harman Kardon provides a supreme listening experience with plenty of choice for outputs and sound modes, and it looks good doing it; there's a responsive touch panel, neat fabric exterior and the option to mount or sit. Where it falls down, unfortunately, is the easy part ŌĆō Google Assistant is forced to remain dormant if you opt for the HDMI ARC, and standard features like the power save function and switching outputs are implemented poorly. This is still a great option for audiophiles, and those who want a smart hi-fi multi-room setup, but those who prioritise their budget and still want Google Assistant would be better served with Sonos.
PROS
CONS

The YAS-109 will come in at $239.95 and feature built-in subwoofers, while the YAS-2019 costs $349.95 as it comes with a separate, wireless subwoofer, for those who are all about that bass. You'll be able to get your hands on these this July if you're in the US and August if you're in the UK.

Team Google? LG's got you covered with its 2019 lineup of smart soundbars. There are six models in total, but just the three high-end soundbars come with Google Assistant, Wi-Fi and Dolby Atmos support. The start with the 3.1.2-channel SL8YG, and all have Bass & Space Image Elevation and Meridian Upmix for immersive sound.