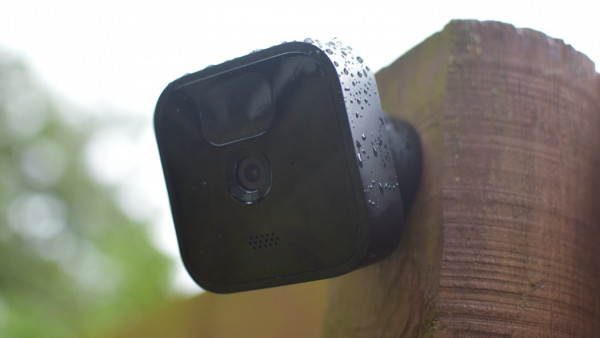 The smart security camera market is a crowded one, so you need a headline feature to stand out. How about 4 years of battery life?

That's the biggest selling point of the new Blink Indoor + Outdoor security camera system, which builds on the first generation by introducing a wireless indoor camera and local storage.

With an indoor model and an outdoor option, these completely wireless cameras have the same impressive two year battery life of their predecessor, the Blink XT2. But slap on the $30 battery pack (coming later this year) and you get double that, so you'll only have to worry about charging these handy cams around twice a decade.

While these aren't - as far as we can tell - replacing the Blink XT2 cameras (which will work with this system), sadly the free cloud storage that was on offer is no more. Instead, the new sync module required for these battery powered cameras to work accommodates a USB flash drive for local storage. You can also opt for a $3 a month cloud storage plan to playback videos.

Price when reviewed
$79
Buy on Amazon

Starting at $79, these are low-priced cameras but not Wyze / Kasa Spot low. That price-tag puts it up against the likes of the Ring Stick Up, the Reolink Argus 3 and the Kami Cam.

This means there arenŌĆÖt a lot of higher end features, but you do get 1080p video quality, 110-degree field of view, IR night vision, motion detection, and two-way audio.

These specs are the same as the Blink XT2, and while there are some minor modifications to the outdoor camera's hardware the main change is that optional new battery pack (which is not compatible with the XT2) and the local storage option.

The indoor camera however, is completely new (Blink's previous indoor offering - the Blink Mini - is wired only). It sports the same specs and shape, but with a more interior-friendly white finish and no weatherproofing to cut $10 off the price.

All the Blink cameras integrate nicely with Alexa (Blink is owned by Amazon), you can view the feed on Alexa-enabled screens and use the camera's motion sensors as triggers in Alexa Routines, plus thereŌĆÖs IFTTT support.

WeŌĆÖve been living with the new Blink camera system for a month now. Read on for our review.

The Blink cameras are small, svelte, and easily mountable, and because of their extra-long battery life and square, flat design they can go almost anywhere (as long as you have WiFi there).

The new Blink outdoor camera looks a lot like the Blink XT2, just slightly sleeker, with a more matte finish and cleaner lines. The indoor cam is identical to the outdoor cam, only in white and sans weatherproofing.

Both are square with a flat base and have a plastic rear cover that screws off (using part of the mount as the screwdriver) to reveal a spot for two AA lithium batteries, plus a USB port.

When closed, the screw opening acts as the attachment for the mount, which can be used as a stand or screwed into a wall or ceiling.

Once mounted you can easily adjust the camera to the angle you need and removing it is as easy as giving it a gentle tug.

The whole setup is very well thought-out with minimal fuss or need for extra tools or pieces of plastic you may or may not use.

The cameras do require a small hub to connect to wirelessly, the Blink Sync Module 2 - which supports up to 10 cameras. This comes packaged with the outdoor camera for $99, additional outdoor cams are $89 and indoor cams $79.

The module acts as the brains of the system and needs to be plugged in indoors. It has a USB port that can accommodate a USB flash drive (up to 256gb) for local storage of recorded footage.

Connecting the cameras to the module is simple, just plug it in, connect it to Wi-Fi using the Blink Home app, power the camera on and scan the QR code on the back.

You need to set up a Home in the app and assign your cameras to it (you can have more than one). Then you can tweak the settings of each camera individually, including adjusting retrigger time from 10 to 60 seconds, tweaking motion sensitivity, choosing clip length (5 to 60 seconds), and whether you want to turn off the microphone and/or motion recording.

A Zones feature lets you set activity zones so the camera only records when action happens in those areas, and privacy zones to never record in certain spots (handy if your cam covers a neighbor's walkway). These features usually cost extra on most systems.

The Indoor cam has the option of turning off the Status LED that indicates the camera is streaming, and a nice feature on both models is Photo Capture, which takes a photo every hour and saves it as a stop motion clip in the video feed.

Once your Home is setup you put it in either Armed or Disarmed mode. When it's disarmed there's no recording or notifications, when it's armed the camera records 5 second clips when motion is detected (you can adjust this length in the app up to 1 minute).

You can arm and disarm in the app, by voice, or on a schedule. There's no geofencing option and you can't arm one camera but not the other.

For voice control you can pair the cameras to Alexa using the Blink Smart Home skill to view a feed on screen-enabled Echo devices as well have Alexa announce motion alerts from the cameras and trigger Routines. There's no Google Home or HomeKit support, but Blink does work with IFTTT.

At this price you shouldn't expect and don't get a lot of bells and whistles (no person detection, or audio detection). But as a simple, smart security system for keeping an eye on things while you're away or incorporating into your Alexa-powered smart home it's a good value, versatile choice.

What we liked most is how compact and easy to install the cameras are. With no need for wires or solar panels or easy access to change the batteries frequently, you can put these anywhere you might want, and the low profile means they don't stick out.

We tried the Outdoor camera inside our rabbit hutch, in the nesting box of our chicken coop, and propped up between two tree branches in our front yard - all places we'd not been able to place any other battery-powered camera we'd tested.

The indoor camera ended up mounted to the wall in a spot on our hallway that catches the entryway perfectly, but where we'd never been able to rig up a wired cam without drilling through walls.

Not having to constantly recharge these is really the biggest selling point. While we've only had these a month, we've also been testing the Blink XT2 and the batteries are still going strong after 3 months of use, where the Arlo Essential Spotlight we're testing has been recharged multiple times.

Not having to worry about charging is a pretty key security feature, when you consider that even though the Arlo has much better video quality (especially at night), there were many periods during the last three months when it wasn't working because of a dead battery, whereas the Blink just keeps on going.

A big caveat on the battery life is that it will last 2 years with "normal use." Blink has settings it recommends to get the most out of your camera, but if you're going to mount this by your front door you aren't likely to get the full two years.

Blink will warn you about this - sending notifications if your camera is getting "high usage" and giving you the option to tweak settings.

What we weren't so keen on was video quality, 1080p is generally good enough for seeing what's going on, but without advanced features like HDR or quality night vision sensors the footage was often blown out or a bit grainy. Night vision in particular was very limited, producing mainly blurry, fuzzy images.

This was especially true if we stretched the camera's Wi-Fi connection. We were able to set up the cameras impressively far way (about 20 feet into our garden), but video quality dropped noticeably, and often had trouble connecting.

Closer to home things were much more reliable - and the camera we stuck in the trees in our front yard captures nice clear images, although the field of view is quite limited for an outdoor cam.

Two-way talk works well and is easy to access - as soon as you pull up a live view you get a big blue Talk button you press and hold to communicate.

The person listening could hear us through the camera clearly and vice versa and there was surprisingly little lag time. However, audio in live view and on recordings had some noticeable artifacting on both the indoor and outdoor cameras.

Motion triggering was pretty spot on, catching the action a few seconds after the event started (as with all battery powered cams it has to wake up first so generally will miss the first moments of action). The downside here though is the minimum re-triggger time is 10 seconds, so you could miss an event that happens too close to another.

Video recordings are very short, 5 seconds by default. You can up that to one minute and set the camera to end the clip early if motion stops, but that will still eat into your battery life.

Using the app is mixed bag. It's snappy to open and has lots of settings to dig into, but it's not intuitive and pulling up live feeds or recorded video can take a while and would sometimes timeout.

It also opens to a static camera image that you have to set and that doesn't update, and while you can tap it to view a live feed, if you want to see the most recent recorded motion event you need to click into the activity feed where clips from all your cameras are lumped together.

There are quick toggles to turn each camera on and off from the home screen and to tap into the camera's settings, and an Arm/Disarm toggle at the bottom lets you set all the cameras to record on motion or turn off.

This feature, while helpful for privacy, is not very customizable. It's all on or all off, and while you can set schedules so you don't need to remember to do it manually, you can't schedule your indoor cameras separately from your outdoor ones.

New 2020 Blink cameras
Buy on Amazon
Blink Security Cameras
Blink home security cameras offer a solid, inexpensive system that is easy to set up and use, thanks to a fully-featured app and extra-long battery life. The outdoor camera is weatherproof and the indoor version has a nice compact design making it easy to install discreetly. Video quality isn't great, but it's good enough for this price and features like activity zones you pay for on other cameras are free here. The option of local storage and no monthly fees make these good value cams, but with a plethora of (decent) sub-$50 security cameras now on the market, they're priced a bit too high to be as an attractive prospect as they might once have been.
PROS
CONS
TAGGED    security cameras