Smart home reviews from The Ambient

The most advanced light switch you can get, but not the easiest to use 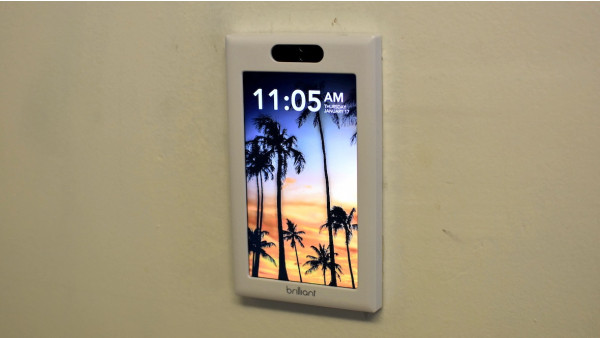 Smart lights can be the most magical part of any smart home, but for some people smart bulbs aren't practical. We instead have to turn to smart switches to get our smart light game on.

Smart switches are functional, but let's be honest, they're also kinda boring. Brilliant, however, is taking the light switch and turning it into a hub for your entire smart home.

I've been testing out the $300 Brilliant One Switch Control as the centre of my smart home. Is it all that "brilliant", or is it just unneeded complication in a world where there are so many other ways to control your home? Read on to find out.

The biggest barrier to entry on any light switch is installation. It can be intimidating to turn off your power, take off your light switch and play with all those electrical wires. You're afraid to electrocute yourself, you don't want to burn down the house, etc etc.

The reality is that most lighting switches are pretty simple to install. You just tie the switch's wires to your wall wires with a wire nut, screw it back in the wall and you're good to go. Brilliant tries to simplify this, in theory, but in practice it's kind of a pain to do.

The Brilliant Switch Control comes in two halves: the display, and the unit that connects to all the electrical wires. All you have to do is plug the wires into the unit and use a screwdriver to fasten the wires in with the built-in wire locks. Sounds simple, right?

Wrong. Firstly, it's difficult to tell whether the wire locks are open or closed; I spent way too long trying to jam wires into closed locks. The other issue is Brilliant's approach to using the wires. It's a little simpler on something like the Wemo Light Switch, which doesn't require your grounding wire to be connected. It does need to be connected on the Brilliant, which gives you a little more work.

Once you've done all the installation, setting up the Brilliant is an exercise in frustration. You'll have to sign up for a Brilliant account, which took me around 40 minutes because the email with the verification number wouldn't come through. I requested it eight times, and all eight emails arrived 40 minutes later.

It was also a nightmare making it work with my Ecobee4. Because the Brilliant works as a hub, you can give it control of a handful of smart home products (as long as they're made by the biggest names in smart home). It's not clear why it wouldn't add my Ecobee4, but it took four attempts over the course of a day before they started talking to one another.

The big difference between Brilliant and other smart switches is its 5-inch 720p LCD display. It's not the greatest screen in the world, but it is eye-catching. You don't exactly expect to see a vivid colour display on your wall showing pictures every day.

But when you do, it's hard to deny how cool it is. There are photos that it cycles through in a slideshow screensaver, but you can also upload your own photos via the companion app.

Because the Brilliant is reliant on a touchscreen, it's different to use compared to other switches. Those switches you usually give a quick tap to turn the lights on or off, or maybe they have motion detection. Here, you have to swipe up and down to power your lights ŌĆō swipe up to turn on and down to turn off.

It's simple enough, but it's more fiddly than just having a physical button. If you get the Two Switch Control or one of the other configurations, you do get touch-sensitive grooves with the same abilities. Oh, and if you use two fingers to swipe, you can turn off your entire room.

Let's circle back to that Two Switch Controller real quick. Brilliant sells the Smart Control in one, two, three and four switch configurations. The big difference between these and the regular One Switch Control is that they add touch-sensitive switches to the left of the display. You can get them if you need to replace a double, triple or quad switch plate.

One quibble. If you're tall ŌĆō around 6 feet tall, like me, for instance ŌĆō using Brilliant can be a bit annoying. Light switches aren't exactly eye level, so I have to often crouch down to swipe and tap my way through the interface. This got especially annoying during setup, where you have to use a keyboard to type.

Oddly, the biggest competitor to the Brilliant Switch Control may be the Google Home Hub rather than any other light switch. Both devices feature touch controls that give you access to your entire smart home, and both have built-in digital assistants. The Home Hub obviously has Google Assistant, while Brilliant has Alexa.

Alexa works well here, but while you may have visions of an Echo Show slapped on your wall, this is not it. Alexa is built in ŌĆō give it a command and you'll see a circle of light rotating as Alexa replies, but otherwise there's not much visually. You will get some cool graphics when you ask for the weather though.

Alexa is the star of the show because of its built-in nature, but you can also control the Brilliant with Google Assistant. There is no HomeKit support yet, but the company says that's on the way in spring 2019.

There are a number of integrations you can use with Brilliant, but only the most popular smart home products make the cut. You can connect your Philips Hue lights, but if you want to use Lifx you need the Samsung SmartThings Hub, which is supported by Brilliant. You can pair a Nest Thermostat, but not a Nest Hello or a Nest Cam. Ring Doorbells are good, but not Ring Alarm. August locks will work, as well as any Connected by August locks from Yale.

Compare this to Google Home Hub, which allows you to control your entire smart home, and it's hard not to feel like Brilliant just isn't there yet. I have a complicated smart home with a smorgasbord of devices. My lights are a mix of C by GE, Sengled and Lifx, for instance, and I can't control any of them with Brilliant.

When you do connect your devices to Brilliant, it works pretty well. I was able to control both my Ecobee4 and my Sonos speakers nicely once they were set up. You can only play songs that are saved in your My Sonos library in the companion app, but it still works well. You even get a nice view of some album art.

Elsewhere, there's a camera with a privacy shutter to video call other Brilliant Switch Controls in your home. The idea is that you can install these in each room, giving you easy access to call someone else up and tell them it's dinner, or yell at the kid that they need to go to bed, or whatever else. This is not something we were able to test, as the second Brilliant Controller we had was a two-switch, and I was not able to install it.

You can also set alarms, organise your smart home by rooms and create and use scenes to command a lot of your smart home at once. The scenes are a good idea, but if you've got a smart home with a lot of different devices, like I do, it's not that useful. Why not just turn to Alexa or Google Assistant, or HomeKit for that matter?

Brilliant Switch Control
The Brilliant Switch Control isn't perfect. It's got a frustrating setup and needs a whole lot more integrations before it's useful on a reliable, day-to-day basis. But it is an amazingly cool idea, and makes you feel like you're living in the future more than most other smart home devices.
PROS
CONS