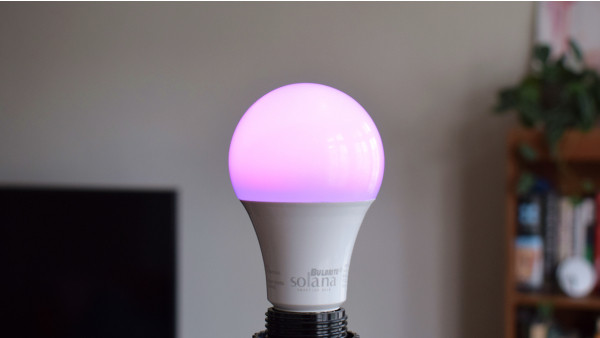 Smart bulbs are growing more popular, with new brands popping up seemingly every day, and prices steadily coming down.

Bulbrite has been making lights for years, but only now is it getting into smart bulbs. Its debut range isnŌĆÖt vast, but there are white, color and filament options to choose from, and a couple of other shapes beyond the classic A19.

Read this: The best smart bulbs

The big win here is that you don't need a hub to use Bulbrite's lights or to take advantage of remote control and automations.

The white starts at $14 and the color at $30, which is undercutting Philips Hue by a fair chunk. Less so rivals like Sengled and Eufy who have moved in on the budget market and are also breaking up with the hub.

The Solana connect to Wi-Fi, work with iOS and Android, and are compatible with Google Assistant and Alexa.

So it all looks good on paper ŌĆō but how do they fare when put to the test? Here's the verdict.

BulbriteŌĆÖs Solana range is pretty fresh, which is why thereŌĆÖs not a huge amount of variety. But it's a better starting lineup than weŌĆÖve seen from some smart bulb makers

ThereŌĆÖs just one A19 color bulb for now, while the white-only comes in A19 and BR30 models, with the latter being a better choice for lighting fixtures and ceilings.

Price when reviewed
$13.99
Buy on Amazon

But the key weapon in BulbriteŌĆÖs arsenal may be its smart filament bulbs, which are still harder to find from big names in this space beyond Philips Hue. ThatŌĆÖs not to say theyŌĆÖre not out there, but there arenŌĆÖt so many. BulbriteŌĆÖs filament bulbs come in A19, ST18 (the more typical Edison style) and the globe-shaped G25.

All three models get a temperature of 2200K-6500K, and Bulbrite says its color bulbs can offer 16 million different hues.

Setup is pretty straightforward ŌĆō most of the time. Without a hub, these bulbs connect directly over Wi-Fi ŌĆō no Zigbee or Z-wave here ŌĆō and the app is pretty good at walking you through the quick process. The bulb will flash when it's ready to pair (quickly and aggressively; it's actually quite annoying) but you should be synced up in no time.

However, there is a bug in the iOS version of the app that occasionally stops you at the Wi-Fi password screen, and so far the only way weŌĆÖve found to get around this is restarting the phone completely. Maybe itŌĆÖs an iOS 13 bug? WeŌĆÖve certainly had our fair share with the update.

Everything can be controlled using the app, which is surprisingly rich with features for a company taking its first stab at smart lighting. However, it's also too messy and buggy.

Some of the functions take about twice as many taps as they need to, and there are some odd glitches, like adjusting temperature within scenes where the slider is just broken (the workaround is to tap it and open the vertical slider ŌĆō yes there are multiple sliders ŌĆō and select your desired level of brightness that way).

Schedules can include times and days of the weeks, or sunset/sunrise, which will work off your time zone (also set in each schedule).

As for Google Assistant and Alexa, the app isnŌĆÖt super helpful in aiding this process. ThereŌĆÖs a section for assistants called Connect in the settings, but tapping on either Alexa or Google Assistant will just kick you to their respective web help pages for connecting devices generally.

ThatŌĆÖs fine, but it feels a bit lazy and inefficient, when all Alexa users need to know is that they first have to enable the Bulbrite Skill in the Alexa app, before it's able to scan for the bulbs on your Wi-Fi. Once that's done, Alexa should automatically detect the lights, as it did for us. Otherwise you can manually search for devices on your network.

For Google, youŌĆÖll just need to go into the Home app and set up the bulbs as new devices. Yeah, it's much simpler.

In both cases, you can ask your choice of assistant to turn lights on/off, dim them by a certain percentage (or just say ŌĆ£Alexa, dim the lightsŌĆØ and have it dim by 25% each time), and have them adjust the temperature, making the bulbs warmer or colder as you please.

Look, weŌĆÖve tested more smart lights than youŌĆÖve had hot meals, and when you get to this stage you know what's good and bad about a bulb before that cellophane wrap is even off.

A slight exaggeration, sure, but there are things you immediately notice. LetŌĆÖs start with the good: the Solana bulbs are some of the most responsive weŌĆÖve tested. Once youŌĆÖve hurdled over annoying setup bugs, they're reliable, quick enough to adjust to changes in the app, and we've had no connection problems whatsoever.

That extends to scheduling and remote controlling, both of which have worked reliably in our testing.

Where the Solana bulbs sorely lack is in their range of brightness. The white and color lights are 60-watt equivalent bulbs with the same lumen count as a Philips Hue, and for whites they go just as bright.

Great. However, the scale of brightness feels much, much smaller on the Solana, in both color and white modes. We ran the same colors through both a Solana and a Hue bulb, and the Solana was noticeably more dim at the brightest setting.

When we set them both to white and dimmed down to the lowest each would go (before they'd just turn off), the Solana was much brighter.

Bulbrite Solana
Bulbrite hasn't half-assed its debut range of smart bulbs, which come packing ample features and don't require a hub. The app needs cleaning up, but the biggest letdown is the lack of range in brightness.
PROS
CONS
TAGGED    smart lighting