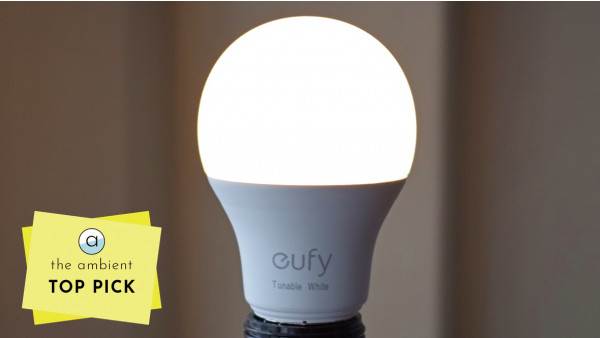 While Philips Hue is arguably still top dog in smart lighting, the continued high price of entry has created an opportunity for other companies to slip in and undercut it. One of those is Eufy, sister brand to Chinese company Anker, which you may know best for its portable chargers.

Eufy has a few smart home products including lights, cameras, robo vacuums and an Echo Dot-like Alexa smart speaker. Low pricing is the appeal across the entire range, with smart bulbs that cost around $15 a pop. The other good news? No hub is required.

Eufy's new Lumos 2.0 bulbs retain that killer feature, but they're now smaller, making them better suited for use in lamps. There's also plenty of smart connectivity, which we'll get onto. Here's the full verdict.

By numbers, Eufy's bulb range is a meagre offering, but the company is now rolling out its Lumos 2.0 bulbs, which come in white and turnable white. There is a Eufy colour bulb available, but only in "version 1", so it doesn't benefit from the smaller design or improved Wi-Fi of the newer models ŌĆō otherwise it's largely the same though. Also, the new 2.0 bulbs have only just been made available on Eufy's site and on Amazon, and if you're in the UK you can only get the older models (at the time of writing; that's likely to change very soon).

All of Eufy's bulbs have an outage of 800 lumens ŌĆō the same as a regular 60-watt incandescent bulb ŌĆō and come in the standard A19-E26 fitting. One problem that the older bulbs suffered from was being too tall, but as mentioned, Eufy has shrunk them down for 2.0, so they're now friendlier with a wider range of fittings.

Responsiveness has generally been good, though not quite as fast as the Hue bulbs we tested them against. It's hardly noticeable though, and the biggest compliment we can give Eufy is that the bulbs justŌĆ” work. Every time. Which is exactly what you want from a smart bulb, right?

The fact you don't need a hub to use the Eufy bulbs is already a big plus, and eases the installation process. Eufy's bulbs work entirely with Wi-Fi, and for 2.0 Eufy says it's upgraded the antenna to improve coverage and reliability.

Installation is done through the Eufy app, for which you'll need to make an account. Then there's a familiar dance between the app and the Wi-Fi settings as you get the bulb talking to your router (you can only install one bulb at a time). It's reasonably straightforward, but could be made a little easier. For example, it asks you to enter your Wi-Fi password at the start of the setup process, but it doesn't verify this until the very end, once it's already tried to get your lights and router talking. On the first instance I entered the incorrect password, and had to restart the whole process all over again ŌĆō which includes resetting the bulb.

Eufy recently upgraded the app, making it simpler to navigate. Features are pretty minimal, but include a scheduler that lets you turn multiple bulbs on/off at select times, and an Away mode that will turn the lights on and off at random when you're not home. Both of these worked reliably in testing.

The app also lets you adjust the brightness manually or select pre-set options such as 'Relax', 'Read', 'Night light' and more, which will adjust the bulbs accordingly. If you have the tunable bulb you can also adjust the temperature from warm through to cool white.

While Eufy's bulbs have been impressively consistent in testing, the fact they're connecting on Wi-Fi alone means that if you want to fill your home with these bulbs, you'll need to have excellent Wi-Fi coverage throughout. Ignore this at your flickery, frustrating peril.

Alongside using the app, all of Eufy's bulbs work with Alexa and Google Assistant. We've been testing with both, and getting Eufy talking to both was a breeze. It just requires signing into your Eufy account through the Alexa or Google Home app, depending on which you're using (or both). If you have a Google Smart Display, Eufy's bulbs will also show up on the Home View dashboard.

You can use Alexa and the Google Assistant to turn lights on/off, adjust brightness or (if you have a colour bulb) specify colours. But there's stuff you can't do using voice, such as setting to those pre-set modes or setting Away mode. You'll need to use the app for those.

These are typical third-party integrations but they're nonetheless welcome, especially when paired to lights that don't need a hub in the first place.

Eufy Lumos
Eufy proves that cheap smart lighting doesn't have to suck, and while you don't get the full package of smarts and integrations you'd get with Hue, there's enough here to satisfy many ŌĆō including Alexa/Google Assistant integration. They're also very reliable bulbs ŌĆō so long as your Wi-Fi coverage is good.
PROS
CONS
TAGGED    smart lighting