Does Eufy's affordable robot vacuum do the job? 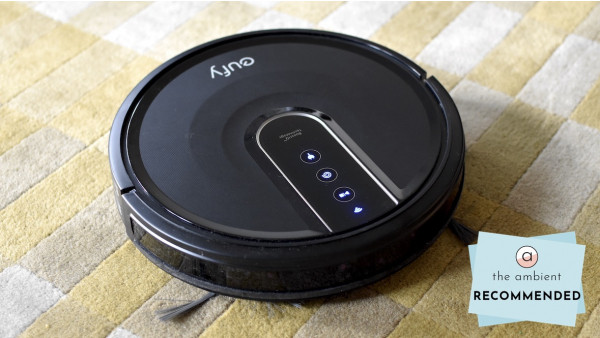 Eufy is one of the newer names in smart home tech - it's a part of Anker, the maker of popular powerbanks and charging cables. Like its parent company, Eufy's products are supposed to be both affordable and great.

The RoboVac 35C is one of its high-end vacuums, but coming in at $300 it's still a bargain compared to other robot vacs, which can come in at $400 on the low end.

Read this: The best robot vacuums of 2020

Can Eufy's 35C give you a good cleaning experience without having you crying into your wallet? Can it stand up to its rivals, like the iRobot i7+ or Xiaomi Roborock S50? We've put it to the test to find out.

The first thing we noticed about the RoboVac 35C is how small it is. It doesn't have the heft of the Dyson 360 Eye or some of the others we've tested. It's also very light, which makes it easy to pick up and move around should it get stuck (and let's be honest, that still happens a lot with robo vacs).

And yeah, it did get stuck. See, the RoboVac 35C is 2.85 inches tall, just under a full inch shorter than the LG .Hom-Bot, which is one of the slimmest robot vacuums we've tested. Its height allowed it to clean places I've never had cleaned by a robot vacuum before. Sounds good, but those unchartered territories - such as beneath my TV cabinet - also proved to be traps for the little RoboVac. So while the height is mostly a plus, it's worth bearing in mind.

On the top of the vac is a touch panel that's reasonably straightforward to use. There's a charge button that'll send it home, a swirl button that makes it do a circular cleaning pattern, a start/stop button, and a Wi-Fi light that shows it's connected to your home network.

I like the design here, but it doesn't look as adorable as the Hom-Bot. It also falls down on one major feature: the front brushes. There are two of them, and popping them on is simple. Unfortunately, they also pop off very easily.

This is both a plus and a minus. It's a plus because I found the RoboVac getting tangled up in some wires and instead of stopping the entire robot, the front brush that got tangled just popped off and didn't bring anything crashing down.

But there was also a time one brush just came off as the RoboVac was sweeping away. It's possible that it got caught as it was transitioning from wood floor to thick carpet, but still, that shouldn't be enough to dismember a robot vacuum.

Elsewhere, you've got a single brush underneath that'll come through your carpets and push dirt and grime into that suction. More on that in a moment.

A lot of high-end robot vacuums, like the i7+, want to automate as much of the vacuuming process as possible. They learn your home, they go back and empty their bins, and newer models are more adepts at avoiding wires along the way.

The 35C is a little different, with the app serving as a bridge to performance. On its own, it does a good enough job. It's got 1,500Pa suction, which is just short of the 1,700Pa suction power on the i7+.

The 35C did a great job of cleaning my wood floors, and it did just a good job cleaning my thicker carpets. However, it is quite loud, coming in at around 77dBs. It's like a constant hum in the background. If you're easily distracted by things, it may annoy you. Also, on default it doesn't use its BoostIQ tech - that's where the app comes in.

Finally, there's a menu option labeled 'A' that'll change how your vacuum cleans: Standard just cleans all regular style; BoostIQ will adjust the suction based on the material the vacuum is on' and Max will go all out. Max is good for cleaning carpets, for example, and BoostIQ can change it up based on whether it's on carpet or wood floors.

Overall, the app is one of the nicer looking companion apps for a robot vacuum. It's got a clean, pretty look. You can also use the app to navigate the robot yourself. It's a fun thing to do, especially if there are kids about (kids have a strange fascination with robot vacuums), but it's more useful as a way to get the 35C out of a jam. Mine got stuck in between some chair legs and I was able to help it out with the companion app.

There are also schedules and a ping system that fins your robo vacuum should you lose it under something. However, there's no cleaning map in the app, so you can't see where the RoboVac has cleaned or where it's headed.

If you're a Google Assistant and Alexa user, you can use the assistants to direct the RoboVac to go home, start and stop cleaning - or ask where it's disappeared to. Speaking of, the 35C comes with a magnetic strip which you can use to keep the little robot from vacuuming certain areas. It's very simple to use: just put it on the floor and the RoboVac won't go past it.

As you can probably tell, the 35C isn't the smartest tool in the shed. It can't do some of the smarter things that other robot vacuums can. It can't map your home. It can't be directed to certain rooms. It can't empty out its own bin or recognize wires. It just cleans.

One bonus is that there's a physical remote included. Not everyone wants to rely on an app or a voice assistant to control their robot vacuum, especially when you've got a family with different preferences. The remote, which gives you all of the functions of the app, is handy.

The worst part of owning a robot vacuum is maintenance, as you have to clean out the bin and clean out any hair that might get caught in the brushes. This is the biggest failing of the RoboVac 35C in my opinion.

Most robot vacuums use plastic or rubber brushes that dig into carpet while also gliding across things like marble or wood. The 35C instead uses actual bristles. This gives you a good clean, but it also means a whole lot of mess.

I found my bristles to be filled with lots and lots of dust, with a ton of hair tying the bristles together. On a rubber or plastic brush, you can easily pull these hair clumps off3 but with the 35C they get tied into the bristles, making it a nightmare to get out. At least Eufy provides a three-in-one brush to deal with this.

The brush has a little cutter that you can use to cut the hair, a comb to clean the bristles and a mini brush to clean other parts of the vacuum. It's a process, and if you hate the idea of cleaning dust, hair and debris then - sorry - it's something you're going to have to do.

The actual bin is easy to use. There's a simple lever that you use to pull the it out of the vacuum, letting you empty all the dust and dirt in one swoop. The bin is also massive. At one point I was wondering if the robot would ever let me know that it was full. I ended up having to empty the bin just so I could test how easy it was, rather than wait for it to fill up. Short of emptying itself, that's the best you can hope for with a robot vacuum.

As for battery life, it depends on how you use the 35C. If you use it on standard mode, which uses a lower suction power, you'll stretch it the furthest; I managed to get about two hours. However, if you go with BoostIQ mode, which changes the suction power based on the surface, you'll get much less. I got about 40 minutes in my testing.

Eufy RoboVac 35C
The RoboVac 35C isn't the fanciest robot vacuum in the room. It can't empty its own bin or map your home or anything like that. However, it can give you a good clean at an affordable price, and it comes with several nice ways to go about that. The app is easy to use and the physical remote is a nice touch. More than anything else, the 35C is a good value.
PROS
CONS
TAGGED    robot vacuums