An excellent video doorbell with no subscription fees 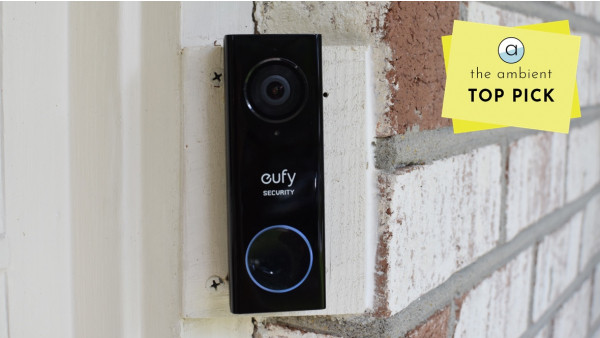 There are a lot of good video doorbells to choose from these days, but the Eufy Video Doorbell is one of the few that's good, inexpensive, and doesn't require any monthly fees.

Eufy does its main job ŌĆō letting you know who is at your front door ŌĆō very well. There's no waiting for endless buffering or any monthly fees here, two things that have plagued much of the competition. In fact, all your footage is stored locally.

It doesn't however, do much with other smart devices in your home, but it can work with both Alexa and Google Assistant.

While Ring and Nest are excellent if you are in their ecosystems, Eufy delivers the goods for a lot less, along with high-def video, speedy notifications, person detection and a high-end design.

You do miss out on some of the cooler features, such as face recognition or being able to trigger other cameras around your home, and there are a few kinks to work out in the software, plus there's is no integration with any smart door locks, but overall Eufy is an extremely good option.

We spent three weeks living with the Eufy Video Doorbell ŌĆō read on for our full review.

Price when reviewed
$160
Buy on Amazon

The Eufy Video Doorbell looks slick enough, with all-shiny black plastic and angled edges. As with most hard-wired doorbells, itŌĆÖs small, as thereŌĆÖs no need for a bulky battery. This means, in most cases, it should fit on your doorframe no problem.

Setup is straightforward, and we were impressed with the step-by-step directions ŌĆō each part is labelled with each corresponding step number, making the whole process sort of like a color-by-numbers effort. You just canŌĆÖt go wrong.

We also liked that Eufy included cable nuts and wire extensions which, depending on your setup, can make the job a lot easier.

As with all hard-wired video doorbells you need to turn the power off to your doorbell at the breaker, remove your old doorbell, attach the backplate to your door (handily labelled 'This Side Up'), then attach the wires to the Eufy.

There is also a wedge included to help position the camera to get the best view of your front door. The only slightly tricky part is where you have to bypass your existing hardwired chime. DonŌĆÖt be tempted to skip this. Eufy says that while the doorbell may work if you donŌĆÖt do this, performance wonŌĆÖt be ideal, as it draws power from the chime.

Once the doorbell is installed you use the Eufy Security app to complete setup. This includes connecting to Wi-Fi and plugging in the included indoor chime, which youŌĆÖll need as your existing doorbell chime will no longer work.

Eufy has some impressive features, considering its relatively low price compared to the competition (it clocks in about $60 cheaper than a Nest Hello).

The camera serves up 2K (2560 x 1920) resolution with HDR technology for clearer images, and offers a 160-degree field of view and 4:3 aspect ratio ŌĆō totally comparable to NestŌĆÖs Hello.

What you wonŌĆÖt get with Nest is 30 days of local storage, on 4GB of built-in memory, for free. This is definitely EufyŌĆÖs killer feature and will appeal to those of you who donŌĆÖt like the idea of sending every bit of captured activity up to the cloud.

The other great feature is ŌĆ£human detection.ŌĆØ If you turn this on you only get alerted when someone is spotted at your door ŌĆō not for every dog, cat or stiff breeze that passes by.

We found this to be relatively consistent, although there were a few days when it was sure the tree in the front yard was a person (we set up a motion zone to cut that out), and the shadow of the rocking chair on our porch reliably sends an alert every morning when the light is just right.

The ŌĆ£quick responseŌĆØ feature is also a good option. When you answer a ring you can choose from some pre-set responses to deliver to the visitor, or create your own in the app. We also liked the four modes you can put the doorbell into: Home, Away, Disarmed and Schedule.

Disarmed turns everything off, and Home and Away are the same, but you can customize the notifications for each ŌĆō so choose to just get alerts but not record video when youŌĆÖre Home, but get both when youŌĆÖre Away. You can use the Scheduled setting to have Home, Away and Disarmed turn on automatically based on your daily schedule ŌĆō very handy if you have a busy front door and dislike constant notifications at all hours.

All the expected features are also here ŌĆō two-way audio, night-vision, regular motion detection. Motion detection pre-buffers about 3 seconds so you will catch activity just prior to the trigger.

EufyŌĆÖs app has lots of other settings to tinker with. ItŌĆÖs designed for EufyŌĆÖs line of home security cameras, so thereŌĆÖs lots of customization here. You can choose to change the video quality to save storage space, designate activity zones, and choose to turn the LED light on at night.

You can also enable or disable HDR processing, depending on how the view on your porch looks (HDR will help enhance the video if you have a dark or backlit front doorway).

The Eufy Video Doorbell performed very well for us. We were particularly impressed with the speed of notifications (likely due to the local processing), and the small screenshot we got both on the phone and on our Apple Watch whenever an event was detected. ThatŌĆÖs great for letting you see whatŌĆÖs going on with a quick glance, rather than having to open the app.

Interacting with a visitor was pretty smooth; thereŌĆÖs a few seconds lag time, but they could hear us clearly, and vice versa. You have to press the microphone button in the app to talk, as itŌĆÖs set to mute by default, and the camera only records the visitor's side of the conversation.

Night vision is very good, and video quality in general is crisp, although when zooming in to say, read a name tag on a visitor, we found it wasn't quite clear enough.

The Events stream in the app took some getting used to. ThereŌĆÖs no way to see which ŌĆ£eventŌĆØ is a ring and which is just someone walking past the camera, and we found the length of time it recorded for varied. Some rings got a full 30 seconds, others cut off after 5 secs, following the call being answered.

If you want to record an interaction after you've answered a ring, you have to tap the record button on the app screen, and the video is stored on your phoneŌĆÖs camera roll, not in the app. This is presumably to do with the local storage ŌĆō but if you wanted to check in and see who members of your household have been chatting with at the front door while you were away, you wonŌĆÖt be able to.

After 20 days of use we had filled up 90% of EufyŌĆÖs onboard storage, so doubt weŌĆÖll make the suggested 30 days of storage before it begins overwriting older clips. We do get a lot of activity at our front door though, and if we notched down the video recording quality it would probably get us a full month. Considering this is all free however, we can't complain.

Finally, we were super impressed with EufyŌĆÖs weather-proofing. ItŌĆÖs rated IP65, higher than Nest and Ring. And we can confirm that itŌĆÖs really rugged ŌĆō it survived a 12-hour beating by Hurricane Dorian during our testing (albeit under a porch ŌĆō but the rain was literally sideways at times).

You canŌĆÖt do much better than that.

Eufy works with Alexa and Google Assistant, letting you view your camera stream through either assistant's screen-enabled devices. With Alexa you can also have your Echo speakers announce when someone's at the door. While Eufy's included Chime only lets you use one default sound, paired with an Echo speaker you get a wide range of sound options.

Eufy also works with Alexa's Routines. So, for example, when someone presses your doorbell you can have your speakers stop playing music and turn the light on by the front door. It doesn't work on motion however ŌĆō only if the button is pressed.

Our main disappointment here is a lack of integration with a smart door lock, so you can't lock or unlock your door through the app while you're talking to a visitor, although only a couple of the competition actually offer that.

Eufy Video Doorbell
The Eufy video doorbell is a very good entry in this crowded space. It's not the cheapest out there, but with person detection and free video recording it's definitely worth considering, especially if you don't want to pay a monthly fee to see who was at your door. Video quality is good and there's almost no buffering, but if you want a lot of smart home integration you'll need to look elsewhere.
PROS
CONS
TAGGED    video doorbells    security cameras