A wireless smart cam with a year of battery life 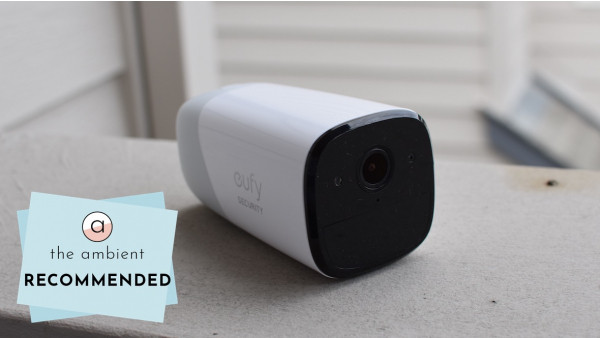 Eufy is a newer entrant in the smart home market. It's got a number of devices, like robo vacuums, plugs, scales and smart speakers. A more significant part of its smart home business is security.

Eufy has several security cam kits, but one of its most fully featured is the EufyCam. You're getting an outdoor camera and an indoor camera, plus a base station that will give you some local storage.

Read this: The best smart cams

It's a versatile system that could be a great all-in-one package for a lot of people. But does it work as good as it sounds? Or is it too good to be true? We spent some time with the EufyCam to find out.

The EufyCams look like something out of JJ Abrams' Star Trek. They're clean and white, with a two-tone body and a black face. They also have a nice heft to them, so if you place them somewhere they won't move.

They're long rather than tall, which gives you some good mounting options - a wall, a small crevice, you name it. I put it outside in between my satellite dish's legs.

There are two mounting options on the back. There's a magnetic concave groove that attaches to a half-a-sphere indoor mount. The magnet is strong enough where you can put it on your wall and the camera will hold. It won't move, it won't fall - it sticks well.

There's also an outdoors mount, which you can screw into the back of the camera. The camera is IP67 weatherproof, working in temperatures as cold as -4-degrees to 122-degrees fahrenheit. On the front of the camera, the black face masks a 1080p camera and a couple of sensors.

There's also the base station, which doesn't have the heft the cameras does. It feels a little flimsy, but it's easy enough to use. You just plug it into your modem with the Ethernet cable and then plug in the power. You use the Eufy Security app to set things up. You choose the device in the app and then hold the top button for a couple seconds. If your base station is connected to the same router your phone is, they'll connect.

The camera setup is slightly different, but easy nonetheless. You won't need to worry about connecting the cameras to Wi-Fi - it's all handled by the base station.

Mounting isn't too difficult. If you can use a screwdriver and a drill you'll be able to handle setup outdoors. Indoors, you can get away with hammering some nails into the wall and hanging the mount there. However, mounting indoors isn't recommend. Not because it's hard, but because it looks terrible. You'd be better putting it on a shelf or a windowsill.

See, the EufyCam is long, which makes it easily visible and great for the outdoors. It doesn't work the same indoors. When my wife saw it mounted indoors for the first time, she commented that it looked a bit creepy. I have to admit, it looks a bit too home-surveillance.

A lot of smart cams come with subscription plans that give you extra features like facial recognition and cloud storage. The EufyCam has no subscription plan. Oh yes, the price you pay up front is all you'll pay.

And you get a good number of features included. There's the 1080p video at a field of view of 140 degrees, which is a solid amount of coverage. It's larger than the 120-degree field of view of the Amazon Cloud Cam, and it allowed me to easily cover my entire living room (or at least the sections that matter).

The video quality is pretty good. It's clear and easy to see, though things get a little hard to decipher with its night vision mode, especially when you're watching it live via the app. The night vision switches on automatically. I took the camera from a dark room to a bright room and saw, within the app, how quickly it switched.

One thing that's very impressive is facial detection. It works fast. As soon as it detects someone, it'll take a zoom-in photo of the face and give you an alert You can even add recognized faces in the app, so if the camera detects, say, yourself, it knows not to hit you with notifications when you enter the frame.

There's also two-way audio, so if you see someone outside you can hold down the microphone button in your app and began scaring off that burglar, or call the kids in from outside.

There's also 256-bit encryption, and some smart features here are focused entirely on security. The cameras have two modes: Home and Away. The big different here is with Away, the built-in sirens will scream when they detect somebody. This can be a little annoying outside, as I put my camera outside and it went off - I searched the footage but didn't see anyone who could have triggered it (it has smart detection that lets it know the difference between humans and everything else).

You can choose whether the siren emanates from the camera or the base station. The base station's siren is 100dBs. If you're away, the EufyCam can also trigger a theft alarm. It uses its accelerometer to try to sense when someone moves it and then screams.

As for storage, there's no cloud storage. The base station takes microSD cards that'll store your video. It comes with a 16GB card, which will store a year of video, and it'll support up to a 128GB card. Even better, the cameras have a year of battery life. To recharge them, you just have to plug them into the base station with a USB cable. Seeing as how Eufy's parent company, Anker, is an expert in battery packs, this isn't a big surprise.

The cameras also have two different modes: one made to push battery life to a year and another is better for security. The biggest difference is that battery saver mode will keep video clips to 20 seconds, while the other mode will do 60 seconds. The security mode will also try to capture every possible moment, while the battery mode is a little more selective.

There are some signature smart home features that aren't here. There's no geofencing support or motion zones, which are features a lot of other smart cameras. There's also no voice assistant integration here - well, officially. Alexa integration is in beta. It'll allow you to watch your footage on Echo Show, Fire TV, Echo Dot and other Alexa smart displays. It... sometimes works, which is expected from a beta. Better to wait until it's out of beta for the best experience.

Eufy's got a whole lot of different smart home apps, and it kind of feels like they need to find a way to consolidate all of them into a single package. Still, the Eufy Security app you use for the EufyCam is pretty good. It's well laid out and easy to use.

It's very easy to add a device and setup your system for the first time with good directions. But there are also a lot of options, so it can be kind of be overwhelming. See, each camera has its own settings, and since there are two cameras that can mean a lot of jumping about and fiddling with options.

Otherwise, the camera has three tabs. There's the Device tab, which will get you to the aforementioned camera settings and let you actually see your feeds. The second tab is Events, which is where you'll find all the motion events that have happened four camera. It's divided by days, and will list all the events from the day in chronological order. It also gives you a good look at the people it detects in each event, which is handy and easy to understanding.

The final tab is Mode, which will let you switch the cameras between Home and Away mode. There's also a scheduling feature you can use to automatically switch between the modes based on the day and time.

The app works well. It's fast and easy to use until you open up a feed. It takes a little while to get the feed going, especially if you're on battery saving mode. Nest's app, for example, is a lot quicker at getting you into the action and seeing what happened. It's also easy to scrub back into the past to see what you just missed.

It's not as easy with the Eufy app's method. You can't even scrub through video while you're in the video feed, which is a little disappointing. One neat thing about Eufy's app is that there are a number of options at the bottom of the feed.

There's a record button, a clip edit button, a microphone button for two-way audio, a way to mute audio and a settings button. The settings button brings up a number of new features: A shortcut to the Event tab, a Night Vision toggle, a siren toggle, and a shortcut to even more camera settings. These extra settings include adjusting the motion sensitivity, turning on anti-theft detection and more.

EufyCam
EufyCam is technically more than just a smart cam, it's a bundle that comes with two cams and a base station that doubles as local storage. If you're looking for a camera kit that does the basics, and has a nice focus on security, the EufyCam is a good get. When it comes to smart features, it's still got a way to go, but this is a good start.
PROS
CONS
TAGGED    security cameras