Eve Cam review: Strong on privacy but some performance issues 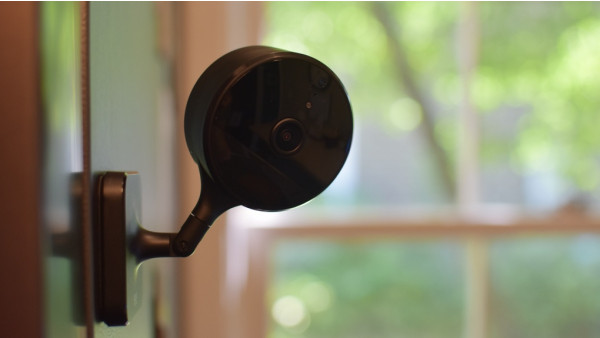 Announced at this year's CES, the camera started shipping this summer and is as tightly integrated with the Apple smart home as all of Eve's connected devices. HomeKit Secure Video rivals have arrived in the meantime, including the impressive Logitech Circle View and the EufyCam 2.

The key feature of HomeKit Secure Video, which arrived with iOS 13 but is getting a lot of updates with iOS 14, is privacy. Most security cameras send video to the cloud so they can offer useful features such as person and critter detection, HKSV does it all locally on your HomeKit hub (Apple TV or HomePod).

When footage is sent to iCloud to be stored, it's encrypted end-to-end and only you have the keys.

Eve, a German company, has been all in on Apple HomeKit for a while now and its entire line of products only work with the Apple ecosystem, so it's no surprise to hear that the Eve Cam is similarly a one partner pony.

The ┬Ż129.95 smart home security camera offers a pretty standard set of hardware features - designed for indoor use, it has 1080p HD video, a 150-degree field of view, IR night vision, two-way audio courtesy of a built in speaker and microphone, and an agile mount that allows the camera to be manually adjusted into your ideal viewing position.

There is nothing particularly noteworthy on the hardware front here, and the features are largely HomeKit specific - meaning they're the same as any other HomeKit compatible camera.

So, is the Eve Cam the right choice for you? We've been putting it through its paces to find out, so read on for our full review.

The Eve Cam is a small, nice looking security camera that is discreet and lightweight enough to tuck away unobtrusively on a shelf or mount on a wall in the corner of a room.

The design here isn't very noteworthy, there's nothing particularly stylish or innovative. It also has a slightly disappointing plasticky feel - especially compared to its main rival the Logitech Circle View, which has a solid metal base and a more substantial presence.

In fact, the Eve Cam takes a lot of design cues from the original Nest Cam, which means it looks slightly old-fashioned. But there's a lot of practicality to that design, including a 360-degree rotating mount and a 180-degree up and down movement, so you can get exactly the right angle.

A magnetic base gives you easy mounting options, especially when paired with the included metallic disc that you can literally stick (or screw) anywhere. We also really like the sticky plastic footing on the base the keeps the camera secure on any flat surface.

There is no on/off button on the camera, but you can easily disconnect the Micro USB power cord and because the hinge moves 180 degrees up and down you can physically "close" the camera so it can't see anything.

A pinpoint blue LED light indicates when the camera is streaming but inactive, and will turn red when streaming is active and recording is turned on.

Set up, as with all HomeKit-enabled cameras, is super easy. No need to download a third party app and create an account, just plug in, scan the HomeKit code, and youŌĆÖre good to go.

The main features of Apple HomeKit Secure Video are Full HD 1080p live streaming, motion-triggered recordings, smart alerts that distinguish between people, pets, and vehicles (the latter not super useful for an indoor camera), and rich notifications that send a snapshot to your phone and let you view the clip directly from your lock screen.

You can use the camera's motion sensor to act as a trigger for Automations in HomeKit, and the Home app will actually suggest relevant ones and set them up with one touch for you. There's no LUX (light sensor) in the Eve Cam however, so if and when Apple allows Automations based on light levels this camera won't be able to help (the Logitech Circle View does have a LUX sensor).

Recordings are stored on Apple's iCloud, and you need both a HomeKit hub and at least a 200GB iCloud plan (┬Ż2.49 a month) to view them, or else all you get is motion alerts and live streaming.

One of the best features of HomeKit Secure Video is the ability for the camera to react to your presence and that of your family, setting itself to one of four modes based on whether you're home or away:

Sadly, you can't add the camera's status to Scenes or Automations in the Home app (it would be nice to have a Nighttime mode that activates your cameras while you're home and sleeping, for example).

There are also no motion or activity zones, so you can't block out areas you don't want alerts from. Apple says this is coming in iOS14, but wasn't part of the Beta we were testing.

One new feature we were able to test out that we really liked is Picture in Picture, which lets you have a stream of your video up while doing other things on your phone.

Another feature coming soon is Face Recognition. This will send smart notifications that include a person's name when the camera sees someone you've identified in your Apple Photos library. If you have a HomePod it can also be set to announce their presence.

Currently, the Home app limits some controls over the camera that are standard on most security cameras - including adjusting motion sensitivity and re-trigger time for motion detection.

With the Eve Cam however, you get the option to tweak these settings in the Eve app, where you can also adjust the orientation of the video (in case you want to install it upside down), check for firmware updates, and view a timeline of when motion was detected. In fact, you can use the Eve app to control your HomeKit home entirely if you want, although you can't view any video through it, that's only accessible in the Home app.

Eve Cam's video quality is disappointing. The colors are muted, objects aren't super clear, detail is difficult to make out, and the zoom is very short. Night vision is similarly unimpressive.

Another area we found issues with was two-way audio. People in the room could barely hear us when we tried to communicate, even if we were shouting - although we could hear them clearly and there was little to no lag time. There are settings in the Eve app (none in the Home app) to increase the volume, but this resulted in a very distorted, staticky sound.

All round it's clear this camera is Eve's first skin in the game and they have a fair number of improvements to make, especially compared to the Logitech Circle View, which has far superior video quality.

However, the design of the camera is more useful for different installation scenarios than Logitech's Circle View. The lightweight design and magnetic base make it easy to put anywhere (especially using the enclosed metal plate), the sticky rubber footing keeps the camera securely on a flat surface, and the cable is much more maneuverable and easier to hide than Logitech's stiff, white affair.

Notifications were snappy and accurate - the smart detection that distinguishes between people and pets and only sends relevant notifications for those worked really well. You can also choose to be notified for "Any Motion" if you want. In fact, the deep dive notification options are another big plus for HomeKit.

We did experience a fair number of issues accessing the video footage, some videos on our timeline weren't accessible at all, we could hear audio but not see video, and the camera was sometimes slow to pull up a live feed, giving us a spinning circle instead of the action.

Overall, the Home app delivers a really great way to access and view footage. We've tested a lot of smart security cameras and their apps and Apple has done a really good job here. When you get a notification it takes you to directly to the event with the option to go live or scroll back through the footage easily accessible on a timeline view right below the clip.

There is also a nice, big "talk" button you just have to press once to open an audio channel (no need to press and hold like on a lot of systems). The only gripe is that you can't manually trigger a recording from the app, the camera will only record if there's an event.

While the video issues are a bit of a dealbreaker, the HomeKit Secure Video platform is a very good one, elevating the Eve Cam above a lot of smart security camera rivals for its sheer simplicity, ease of use, and excellent privacy features.

Eve Cam
The Eve Cam is a very versatile little camera, offering lots of installation options and a super flexible mount so you can get any angle you need. HomeKit Secure Video compatibility means this camera is all about privacy and works seamlessly with Apple's smart home platform, offering a really good app experience that is simple to use. It has a narrower field of view and poorer video quality than its direct competitor the Logitech Circle View, and is also indoor only. But it is less expensive and offers its own app for more granular control.
PROS
CONS
TAGGED    security cameras    apple home