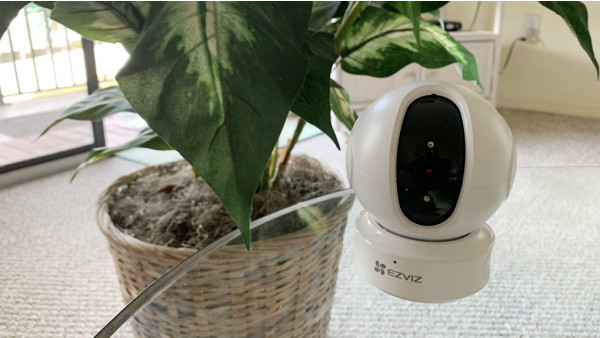 When it comes to home surveillance there's nothing more frustrating than setting up an indoor security camera and having some major event happen just outside its field of view. The solution? Install a pan and tilt camera that can track motion and get the full coverage you deserve.

That's the premise of the Ezviz C6CN Indoor Pan and Tilt Security Cam with Motion Tracking, and it works pretty well.

A slightly bulbous looking smart security camera, the Ezviz C6CN was released this October and is version two of the camera, with improvements including person detection and upgraded image tech.

It also offers on-board storage via a micro-USB card (not included) or you can pay for Ezviz's cloud service.

A couple other noteworthy features include the ability to hook the camera up via Ethernet for a more stable, faster connection than Wi-Fi (2.4 GHz only) and H.265 video compression, which promises better video quality with less bandwidth.

Price when reviewed
$59.99
Buy on Amazon

You can also shut the camera off entirely in the app, and watch it as it rolls back on itself and hides its all-seeing eye, but you have to do this manually, there's no option for scheduling.

You can pick up the Ezviz C6CN for around $59, putting it up against the likes of the Aqara G2H Cam, the Eve Cam, and the Eufy 2k Pan and Tilt in the indoor smart security camera space.

So, how does it compare to the competition and does it deliver on its promise of comprehensive video coverage in your home? Read on for our full review.

This is not a sleek, stylish smart home device. It's large, prominent, very white and very plasticky - with a sideways Eye of Sauron look about it.

At about twice the size of the similarly proportioned Eufy 2k Pan and Tilt cam, it will not blend into your home decor. However, if you want a camera that screams SECURITY! this is a good one. (It can also literally scream "Security!" if you want it too).

It has a couple mounting options, flat on a shelf or table, or attached to a wall or ceiling using the included mount. The ceiling is probably the best place to put this, as then you won't have to look at it, and it will get the best view possible for accurate motion tracking.

Installation is straightforward. Plug it in, download the Ezviz app, register for an account using either your email or phone number, scan the code on the camera to pair with the app and then either connect to Wi-Fi or attach an Ethernet cable. The camera has helpful voice prompts to walk you through the process.

Placing it is also really easy as it has an impressively long, 10-foot cable, so you're not as tied to the locations of your outlets as with some indoor cameras, such as the Aqara G2H which has a measly 5 footer.

The Ezviz has all the standard features you'd expect on a decent security camera: 1080p HD video, two-way talk, a privacy mode, the option to shut audio recording off, cloud or local storage of your videos, and night vision (which impressively goes up to 33 feet.)

In terms of advanced features, you get person detection as well as motion detection, and the camera can rotate a full 340-degrees horizontally and from 120-degrees to 15-degrees vertically - getting you very full coverage of your space.

Its motor is also whisper quiet - you literally can't hear it when it pans, which is impressive.

The combination of these features is the camera's main claim to fame - it will detect and track any person that enters its field of view, following them until they're out of sight.

It also features True Wide Dynamic Range and a f/1.6 aperture lens, which helps balance high contrast scenes, getting you a more even picture, even if the sun is shining in through a window.

The camera has good security and privacy features, and offers 2FA for logging into view live feeds, as well as end-to-end encryption of your videos. But you can't program it to turn itself on or off, you have to do that manually (you can set a schedule for notifications, however).

You can set motion zones so you only get alerts in certain areas - but this doesn't play well with the pan and tilt feature as the camera's field of view moves constantly and it doesn't always return to where it started. However, the option to draw a line and get an alert when motion crosses it is helpful.

We also like the Panoramic Photo Navigation. Instead of having to hold your finger on the pan and tilt controls in the app to move the camera's view to the part of the room you want to see, you just tap your finger on a 360 degree image and it will automatically look that way.

You can set the camera to play a warning tone when it detects a person. It's set by default to a soft tone, and you can choose from intense, silent, or even record your own.

You get a 7-day free trial when you first set up the camera, which can extend to 30 days for free if you sign up for one of the plans.

The camera works with Alexa-enabled screen devices to pull up a live view, but you need to turn off the image encryption setting for this to work. Once enabled it pulled up the image promptly on the Echo Show 8 we tested it with - but you can't pan and tilt the camera on the Echo device.

It also has Google Home integration, but for this one you have to mute the camera's sound notification, which we did but were still not able to pull up a live feed.

Overall we were very impressed with this camera's image quality. It produced crisp, clear live views, with rich colors and plenty of contrast, although there was some artefacting around movement.

The 8x digital zoom provided an impressive amount of detail (we could zoom in and read the name on a cereal box at the other end of the room), and night vision was very good.

Similarly clear and crisp, night vision produced clean images with the ability to make out people's faces with no problem.

Unfortunately, we found motion tracking both at night and during the daytime to be quite spotty and unreliable. In many cases it produced jerky footage, or lost track of the subject within a few seconds.

Efficacy largely depends on where you place the camera. While Ezviz recommends putting it in a far corner with at least 7 feet distance from likely action, this was tricky in our long, narrow living room area.

We tried a few spots, including one where it had a view of our front entry hall as well as the main living room.

It was able to track people as they came in the front door, but lost them once they got close to the camera, not turning to track them into the living space. As we mentioned previously, mounting this on the ceiling would likely produce better results.

Our least favorite aspect of using the Ezviz is the confusing, poorly laid out app. While it pulled up video from the notifications quickly, the notifications are long and wordy and feature lots of numbers but no snapshot of the action.

The app has plenty of functionality, and in addition to watching a live feed or viewing recorded video, this is where the pan and tilt controls are and the two-way talk function.

There are also lots of options and settings to tinker with - you can disable audio recording, adjust motion sensitivity, and increase or decrease color saturation.

But it's not easy to find most of these settings as the menus are confusingly laid out, poorly worded, and settings are in three or four different locations.

We spent a good 15 minutes trying to figure how to turn off the warning tone as it was going off constantly on any motion. We ended up having to Google it, where we discovered it was under "Alarm Notification," then all the way down at the bottom under "Select The Mode."

We did like the sliding timeline as a way of viewing your video history, which makes it simple to jump right to the clip you need or just scroll through footage to see what's been happening while you were out. But overall using the app was a frustrating experience.

While the Ezviz doesn't have continuous video recording, only recording on motion, it does a good job of capturing the few seconds before motion occurs, and because it's mains powered there is little if any lag time between recordings - which means with this camera you're never going to miss any of the action.

EZVIZ C6CN Indoor Pan and Tilt Camera
This is a smart security camera with the emphasis on security. It's designed to track and identify intruders, although it will follow your pet about too, so works well as a puppy cam. Its design is uninspiring and its app a bit of a mess, but it offers a full 360 view of your room and at only $60 is an inexpensive way of covering a large, indoor space. The Ethernet connection option is great for reliability, but few and limited smart home interactions mean this isn't a great addition to smart home.
PROS
CONS