A dash cam with Alexa built in 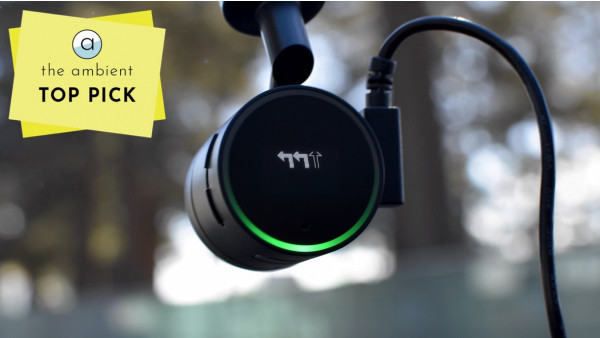 Alexa is weaving into the car at an increasing pace. Garmin just so happens to have a good foothold in the car thanks to its popular GPS devices. What happens if you were to combine them into a single device?

The Garmin Speak Plus would happen, combining Garmin's mapping abilities with Alexa and tossing in a dash cam and accident detection to round out the feature set. But does all of that tech coalesce into a good driving companion?

Read this: Essential guide to the smart car

We spent many hours driving around aimlessly, getting directions and listening to Pandora to find out. This is how we got on.

Garmin Speak: Design and use

The Garmin Speak Plus is a tiny, tiny device. It's about half the size of a thick lipstick holder. It's actually kind of remarkable given how much technology that's packed into it. It attaches to your car via the dash or windshield, and there's a rollable hinge that you can use to adjust.

On the back-facing side, there's a 0.68-inch x 0.38-inch OLED display that'll show you notifications, surrounded by a light ring that will change colours depending on what it's doing. It'll turn that iconic bluish-green when Alexa speaks, yellow for notifications and green for navigation.

Facing forward, there's a 1080p dash cam that can both record video and take pictures. One thing to note ŌĆō there is a regular Garmin Speak with no dash cam. The Plus simply adds the dash cam, which enables a mess of new features.

That display, by the way, is mostly visible, even in brighter conditions. Where it takes a massive hit is if the sun is blasting into the backside of the car. It was completely unreadable for me when that happened.

On the left side of the device are two buttons ŌĆō the top one activates Alexa and the bottom one is mostly used to cancel operations, like syncing video and photo transfers. They click nicely, but they're pretty awkward to use. Obviously, don't use them while you're driving.

For the most part, the Garmin Speak Plus is pretty easy to ignore when you're on the road, and Garmin has come up with some interesting ways to not have you staring at this thing too much. for example, that LED light ring will fill up as you get closer to your turn. When it's full green, you turn. It's a simple, effective way to convey the distance until a turn.

However, the Speak Plus requires wired power, so you'll need to plug it into your car's power output ŌĆō definitely one for the "cons" column. This cable also has a habit of getting in the way and hangs awkwardly. It's a little easier to deal with if you put it on your dash, but on the windshield it's super annoying.

That's because it uses a Micro-USB, which isn't reversible like USB-C, so when you put the Speak Plus on your windshield the Micro-USB is technically "upside-down". The cable is angled upward, then comes down. You also have a whole bunch of cables dangling in front of your car's control centre. It could be less of a mess, honestly.

To set up the Speak Plus you simply stick it on your dash or windshield and then use the Garmin Drive app to connect it via Bluetooth, while also linking Alexa to the device and Garmin app. You will need to connect your phone to the car via either AUX cable or Bluetooth though. Once you do that, you're ready to roll on.

The biggest feature on offer here is Alexa, which isn't that much of a different proposition than it is in the home. There are some things you can't do though, like use Spotify or Apple Music. Those aren't supported at this time, but it sounds like Spotify could be added eventually. Also, if you want to listen to the radio you better have an app on your phone. You must keep your car on AUX or Media mode to use Alexa.

Naturally, you can listen to news, podcasts and flash briefings, plus your weather reports. Your smart home devices will also be controllable, and you can also shop while in traffic. All of that is there and works pretty well.

Alexa's got some device-specific powers here though. For instance, you can ask it to take a photo or video from the dash cam. You can also ask it for directions to a place, and it'll then boot up Garmin's navigation. Alexa handles it all with ease.

Garmin Speak Plus
Buy From Amazon

That brings us to navigation ŌĆō which is actually one of the worst parts of the device. You'll be using Garmin's own navigation services here, rather than Google Maps, which is used by the rival Roav Viva. For the most part, it got me where I needed to go and did it accurately. However, it did take me a couple of blocks away from one destination, and it gave me a slower route than usual when I tried to get it to re-route. If you want the fastest and most optimised routes, Google Maps is still going to be a much better option.

However, it does give you glanceable directions on the Speak. It'll show you how long you have until the next driving action, as well as which lane you need to be in when it's time to turn. As mentioned, the LED light ring fills up to let you know how close you are to your next action. I really like this feature.

The final thing is the dash cam, which records in 1080p and takes photos. It's always recording, and you can go into the companion app to select, edit and download clips to your phone. It's pretty simple to do, and when you want to transfer things over it creates an exclusive Wi-Fi network for your phone and Speak Plus, which is far better than transferring video over Bluetooth.

Even better, it has lane departure and near collision warnings. So if you're veering from your lane, it'll light up yellow and make a sound. If you're too close to a car in front of you, whether you're speeding or the car is breaking too quickly, it'll beep and, light up too. The near collision warning is a little aggressive on the freeway, but it's pretty good at turning it down when there's traffic. Also, if it detects traffic is moving and you've zoned out, it'll let you know. Pretty handy.

It only took a couple minutes to transfer over video, which I could then upload or share with whoever. More annoying is that the Speak Plus needs to be on to transfer footage to your phone, so you need to sit in your car and wait as you move all this footage over. It would be ideal if it packed in an LTE modem, say, so it could transfer to the cloud automatically. Obviously, dash cam footage can be essential when you're in an accident and the other party is disputing what happened. The Speak Plus will automatically save video when it detects an incident.

Garmin Speak Plus
The Garmin Speak Plus mashes up a dash cam with Alexa and turns out a great device that solves multiple problems. Not only is it smart enough to detect possible collisions, it's smart enough to talk to and provide directions. However, there are some things to be mindful of here, such as its reliance on Garmin's navigation over Google Maps. It also lacks Spotify support.
PROS
CONS
TAGGED    smart home    amazon alexa