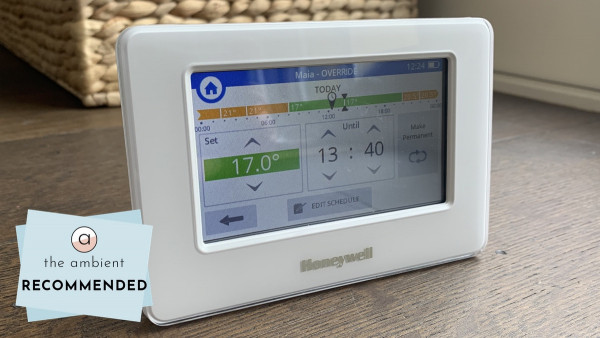 Honeywell's Evohome system was the first multi-room smart heating system on the market when it was launched way back in 2014.

It now has a bunch of Wi-Fi connected home heating rivals, not only from multi-room contenders such as Tado, but also from the smart thermostat gang headed by the likes of Nest and Ecobee.

However, Evohome is still often regarded as the most complete smart heating solution available and, as such, we thought it best to put it to the test for a comprehensive review. I've had the Honeywell Evohome system installed in my house for the past few months, so here's everything you need to know.

In your house, you've probably got a thermostat, smart or dumb, that controls the heating in your house by adjusting your radiators' temperatures up or down depending on what target you set. That's a very basic central heating system, described in a nutshell.

Some people will adjust the temperatures in their various rooms by manually turning the valves on individual radiators. Even with a smart heating system ŌĆō for example, one controlled by a Wi-Fi thermostat ŌĆō that will still usually be the case.

However, with a smart multi-zone heating system ŌĆō such as the Evohome ŌĆō not only is the main thermostat connected, but so are all of the thermostatic radiator valves (TRVs). With the Evohome, the main thermostat controller ŌĆō a touchscreen panel ŌĆō syncs up over Wi-Fi to a boiler relay switch to control the overall maximum temperature, and also lets you set specific target temperatures for each individual zone.

It does this courtesy of the Evohome TRVs, which you can install yourself, although a professional installation is recommended. These TRVs (HR92 Radiator Controllers, to give them their official moniker) replace your current valves, and contain a little motor that manually turns the water supply to the radiator on or off to reach the desired temperature.

These TRVs were designed for a system that went live back in 2014, and it shows a bit. They are a bit of an eyesore and, unlike the slick looking Tado TRVs, won't really blend in with the rest of your futuristic-looking smart home kit.

The main way of controlling the temperatures set on the TRVs is from the controller or the app / digital assistant (more on that in a bit), but you can also manually adjust them using the little dial on the top. The LCD display on them also lights up when you're manually adjusting and you can, if you wish, also have the screen angled up so you can see the target temperature (its default display) a bit better.

If you've got annoying little kids (like I have) who are likely to fiddle with anything they can get their grubby hands on, you'll be pleased to know that you can lock the manual controls of the TRVs from the controller or the app.

Speaking of the controller, and it's like a chubby 4-inch tablet from the mid-2000s. It's not great looking. Fat bezel, fat touch needed to register a response and just generally fat. It comes with either a table-top stand or a wall-mount. Whichever one you use, keep it out of sight. Use the app instead.

A very basic Evohome system just needs the controller and the boiler switch. But, for around ┬Ż215, that's basically the same setup you'd get from a standard smart thermostat. You wouldn't be getting in on any of the heating zone action.

What you want to do is count up the amount of radiators you want included, thus working out how many Evohome TRVs to buy. If you have a room that has multiple radiators, you can use individual TRVs on each one, but have them teamed up in a single zone to reach a shared target temperature.

However, if airflow to the TRVs is blocked ŌĆō say, by a massive pile of teddy bears that your one-year-old shows absolutely no interest in ŌĆō then the reading will be skewed. If that's the case, and it's proving troublesome to get a good reading from a specific TRV, you can get additional temperature sensors for that zone for around ┬Ż90.

The zones are set up when the system is first installed and, while you can change them up at any point, it's not really recommended and is, in fact, hidden in a secret settings menu (long press on the settings icon on the controller, by the way). You can have up to 12 zones in total. That's zones, not radiators ŌĆō remember, you can have multiple radiators in a zone.

Each TRV is around ┬Ż59, although you can save money on multipacks. For example, Amazon (an official Honeywell retail partner) sells a starter pack, with the controller, boiler switch and a pair of TRVs for ┬Ż299. Another retail partner, The Evohome Shop, has bigger 'value' packs ŌĆō controller, switch and eight TRVs for ┬Ż589.

Yes, that's expensive. It's a large amount of money to part with up front. But, given the savings you'll make by only heating the rooms you need heating, you'll save in the long run. Honeywell states that you could save as much as 40% on your heating bill.

The premise of an Evohome system is that it runs on schedules. Once you've got all your zones set up, a schedule wizard will actually populate a schedule for you, based on the room types. However, this is mostly nonsense. You're much better off setting up your own schedules to tie-in with your family's daily routines.

You can do this from both the app or the controller. I actually think it's a bit easier on the latter, especially when it comes to copying schedules to other days of the week, or to other zones. Both the app and the controller also allow you to manually alter the temperature; either until you give it a new instruction, or until the next change-point that's set on the schedule.

There are also some built-in quick modes to make big overriding changes easier, such as eco mode which drops the temperature 3 degrees in each room; away, which turns the heating off; and day off, which will mimic your Saturday schedule ŌĆō handy if you take a day off, obviously.

When it's time for the temperature to adjust ŌĆō either because the schedule tells it to, or you make a change ŌĆō you'll actually hear the TRV's motor whirring to open and close the valve on your radiator. It's pretty noisy. Not so much during the day when you're going about things and have the TV/radio on, but at night time, when it's quiet and you're trying to sleep.

It's annoying. Very much so. Your spouse might tell you to get the system uninstalled. Mine did. She's a bit more used to it now. I think.

The TRVs also have built in window detection, which will turn the heating off in a room where an open window is detected. This is a great idea in theory but we found it annoying in our house. For example, if you just want a blast of air in a smelly kitchen, or smelly bathroom, you don't necessarily want the heating to go off. The good news is you can turn this off (again, with the secret menu). You might like it though. People pay extra for it on Tado, so there must be an audience for it somewhere.

Unlike the Nest Learning Thermostat that learns how you like your heating (clue's in the name), the Evohome sticks to schedules and manual overrides. It doesn't notice patterns in your overrides, or common times you make tweaks. It learns nothing. It sticks to its guns. That's a bit rubbish. I'd have liked the option for the Evohome to study us and our heating habits and at least offer up some suggestions.

There are also no geofencing features, such as having the heating switch off when it detects nobody is home, or turning it on as you approach home on your commute. At least natively in the app, that is. IFTTT is your friend here though; there are a ton of good applets on board that tie your Evohome system in with other geo-friendly apps on your phone. You can, of course, turn the heating on from your phone, wherever you are as long as you've got a data signal.

I haven't tested it myself, because I've got a combi-boiler, but you can also use the Evohome system ŌĆō via an additional boiler link ŌĆō to control hot water, should you have a stored-water solution such as a tank.

It's also compatible with the OpenTherm protocol and can be used in houses where underfloor heating works alongside radiators.

What Evohome has done well, in terms of staying current with the smart home revolution, is opening up the system for third-party controls from the likes of IFTTT, Alexa and Google Assistant. You can also program smart buttons such as Flic or the Logitech Pop to carry out certain actions, such as turning the heating on or off in a zone.

IFTTT, as mentioned, has a wealth of Evohome recipes on board; things like weather conditions changing the heat settings, or having a zone heat up when it detects motion from a Nest Cam.

Alexa, which I've been testing Evohome with exhaustively, lets you set temperatures in zones, activate quick settings, turn heating on/off and any other basic settings the app offers. However, you can also use the power of Alexa ŌĆō and its groups and routines ŌĆō to evolve your Evohome to a new level.

And while this Alexa support (Google Assistant would offer a similar set of options) is great, and really improves Evohome, it's a shame that Honeywell's own app hasn't really evolved in five years.

Honeywell Evohome
The Evohome is, without doubt, a powerful heating system that lets you control individual temperature zones in your house with little or no effort, bar the initial schedule setup. However, it's somewhat dated now, both in terms of design ŌĆō which is bulky at best, ugly if you're honest ŌĆō and smart features. I really missed the learning aspects from my Nest Thermostat, for example. IFTTT and digital assistant integration help to fill some of the 'smart' gaps, but it'd be much better if Honeywell revamped the software powering the show to make it more intuitive.
PROS
CONS
TAGGED    thermostats