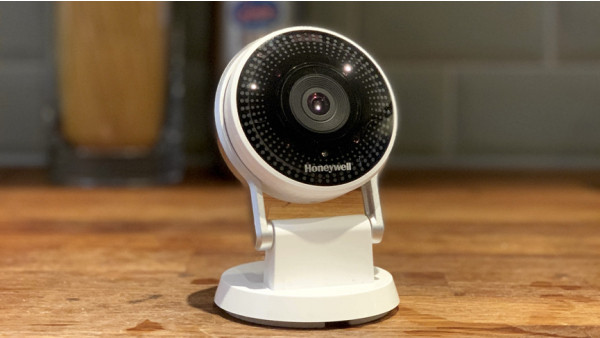 Honeywell is no stranger to the smart home, but it didn't make its smart security camera debut until early 2017, releasing both the Lyric C1 and C2.

The latter, as you can imagine, is the more advanced of the pair, offering a 1080p, 145-degree lens to capture the action and two-way audio. It's also compact, making it perfect for hiding on bookshelves or in tight corners.

Read on for our full Honeywell Lyric C2 review.

While it's not the most premium look, the build of the Lyric C2 does feel solid in the hand and also offers some versatility - if you twist the camera it pops out of the stand to allow for wall or ceiling mounting.

That's really handy if, like us, you don't particularly have a big space you want to monitor and instead would prefer to hover it over your front door.

Once out of its shell, you can also access the microSD slot. There'll already be a 8GB card inside out of the box and, though this doesn't sound like a great deal of storage to work with, the fact Honeywell offers free cloud storage means this on-camera solution is nothing but a backup.

It's not common you can escape the clutches of a subscription and still get everything offered out the box, either, so this is definitely a tick in the C2's favour.

However, while your clips are saved to the cloud for 24 hours and retained on the inside (which means your camera can still record when your connection goes kaput), it would be nice to at least have the option to upgrade the amount of cloud footage saved, and also set schedules for the camera. By not, it means you're not able to really decide when it records, and the Lyric will only save clips when motion or sound is picked up.

Those set up with the company's thermostats or other wares will already be familiar with the app, where you can control the device, but even beginners won't have a hard time. Honeywell makes features like turning the camera on/off through geolocation and setting up the four alert zones (and adjusting sensitivity within them) very straightforward.

The two-way audio also gets a thumbs up. While it's a fairly elementary feature in the smart cameras on this list, the C2 does manage to offer smarter detection and differentiate between the likes of sirens blaring and, say, a baby crying, meaning you get personalised alerts to your phone.

So, what are the negatives? Well, while the Lyric C2 gives you night vision, we found it to be less than sharp during testing. It's not a huge issue, but those who are expecting the same quality in the night as during the day will be a little disappointed.

We also initially had some issues getting the device to make friends with Alexa and Google Assistant; and Apple HomeKit support is unfortunately lacking.

Honeywell Lyric C2
This Honeywell smart camera ticks plenty of boxes, despite falling short in a couple of key areas. While those who want solid quality in daytime recordings, easy setup and two-way audio are catered for, night vision and a lack of options within smart assistant link-up and storage slightly limit its appeal.
PROS
CONS
TAGGED    security cameras