Our verdict on the Google Assistant bedside alarm clock 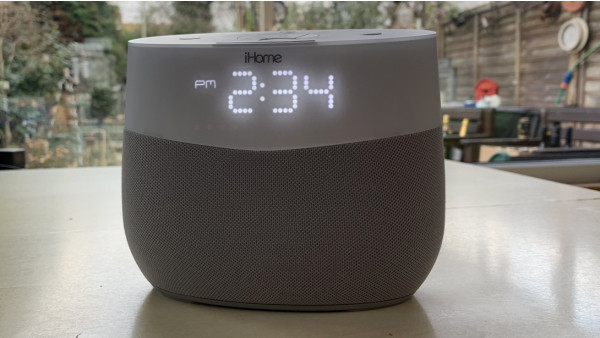 The Google Assistant is everywhere. A quick walk around the halls at CES 2019 would see you face-to-face with speakers, TVs, hubs, tablets and even fridges with Google's digital helper onboard.

Third-party Google Assistant speakers, such as the iHome iGV1 Voice on test here, are essentially Google Homes in different clothes. They all offer the same features as the official Google smart speakers, but often with a twist.

The twist here is that clock you see on the front...

Looking a helluva lot like a slightly squashed Google Home, the iHome iGV1 throws that LED clock on the front and some touch buttons on the top. Aside from those obvious differences it's the same sort of gray fabric / off-white plastic we've seen before.

Those buttons on the top offer media playback controls, alarm snoozing, Bluetooth on/off and the option to turn the microphone off, in case you're worried about the Big G listening in on all of your important chats. If that is the case, you can always tap that colorful button in the middle to summon up the Assistant.

Unlike the Google Home speaker, which displays a ring of moving lights when you say, "Ok Google" / "Hey Google", you'll know that the iGV1 has understood your wake words as four little white LEDs under the clock will animate.

We're not going to go into detail here on everything the Google Assistant can do - we've got a huge guide on that, if you're not up to speed. What we will say is we haven't had too many difficulties in getting the iGV1 to understand us; certainly no major differences from using a native Google Home or Home Mini. Everything on that side works just as it should.

We'll get straight to the meaty bit - that clock. If you're considering buying the iGV1 then you're obviously keen on a smart speaker that also doubles up as a time-teller.

On that front, it tells the time superbly - with a super bright LED display impossible to miss. It also displays the set alarm time underneath in smaller numbers, which is nice and reassuring. You set the alarm, of course, with your voice - asking Google to do the honors.

Clock accuracy is spot on as the iGV1 syns with NTP (Network Time Protocol) once connected to your homeŌĆÖs Wi-Fi.

The only problem with the clock is it is just too bright. Sure, you can turn it off completely overnight if you want, but that seems slightly odd to me... a bedside clock is supposed to let you know what the time is in the night; without lighting up the whole room at the same time.

Okay, that may be a bit of an exaggeration but, even though the physical snooze button also doubles up as a dimmer button for the clock, it's still much too bright - even on its lowest setting.

Sound quality is pretty good - we tested it side-by-side a Google Home and, although it's more famous rival won out slightly in terms of acoustics, there's not much in it. However, like the Google Home - don't think this will be good enough to be your main speaker in a living room. Your ears deserve better.

Finally, and a nice little touch given that the iGV1 Voice is likely to live on your bedside table should you buy one - there's a handy 1-amp USB port on the back, which should be plenty enough power to give your smartphone a full charge while you sleep.

iHome iGV1
Buy from Amazon
iHome iGV1 Voice
The iGV1 is a decent little 'entry-level' Google Home speaker - but the trouble is that it's not really priced-up as so. For less money you could get an actual Google Home speaker and get a much better sound. Or, if you really do want that clock display - get a Home Mini and plug it into a dumb alarm clock with an audio-in port. Look, it's fine - it's just about $50 more than it should be. Plus, the clock is too bright.
PROS
CONS